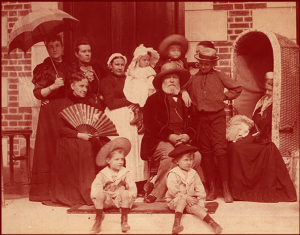 Gounod and his family

Pierre-Joseph Zimmerman was well established on the Parisian musical scene as a retired Conservatoire piano professor with many accomplished students to his credit. Together with his beautiful wife Hortense and their four daughters, the family entertained a lively salon that attracted artists and social butterflies from Paris and beyond. Meticulously planned, these Thursday gatherings frequently featured foreign artists from Germany and Italy, and on occasion, an opera fragment with Conservatory students gaining confidence for the operatic stage.

Prix de Rome winner Charles Gounod was a frequent guest at the Zimmerman salon, and his charming manner and good looks soon attracted the attentions of the Zimmerman daughters Juliette, Zéa, Anna, and Berthe. Charles apparently had no particular intentions beyond the customary flirtations, but got accidentally engaged to Anna when Madame Zimmerman instructed him that he should “either propose or cease compromising her daughters.”

Charles Gounod: D’un Coeur qui t’aime
The four Zimmerman daughters had long been the talk of the town. Smart, well educated, not necessarily pretty but with the promise of a healthy dowry, they certainly would have been considered a “very good catch.” Madame Zimmerman was once asked what kind of man would be suitable for her daughters, and she supposedly replied “A gracious fellow for the first, an adventurous one for the second, and only a coward would marry the third. Whoever marries the forth, however, commits a crime!” 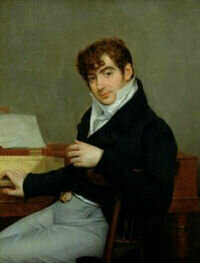 Faced with the Zimmerman ultimatum, Gounod drafted a break-up letter and attempted to deliver it in person. However, as soon as he arrived at the Zimmerman residence, Madame Zimmerman embraced him as her son-in-law before he was able to utter a single world. Gounod might have set the record straight, but instead went along and “cowardly” married Anna. She was eleven years younger than Charles, and it must be said that her dowry might have been a deciding factor.

Biographers have frequently leveled the charge of opportunism at Gounod, and it certainly appears that Gounod was not driven into marriage by passion. In fact, he rarely acknowledged creative or intellectual stimulation from his wife, and her name is not even mentioned in his memoirs. Quite in contrast, when Joseph Zimmerman died prematurely in 1855, Gounod showed a lot of affection towards his mother-in-law, and many pages in his memoirs are given over to her. 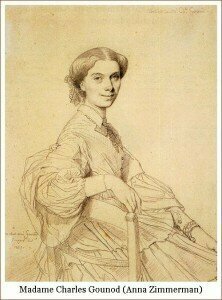 And then, there was the tussle with Pauline Viardot, who was financially and creatively responsible for Gounod’s opera Sapho. When she got word of the marriage between Charles and Anna, Pauline sent a bejeweled bracelet as a wedding present. For some time, gossip and rumors about an intimate relationship between the composer and the singer had been circulating in Paris, and the Zimmermans returned the bracelet to Pauline without comment. Gounod might have taken a stand, but instead came up with the lame excuse that he had already given Anna a bracelet, and that she didn’t need another. “The heart which Gounod talked about so much proved nothing but a bag of selfishness, vanity and calculation,” wrote the enraged Viardot. His new family would have nothing to do with the Viardots, and actively took over financial sponsorship of Gounod’s career. In short order they financed the publication of the Ulysse score as well as of La nonne sanglante. 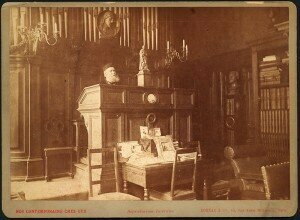 Gounod at the organ

Although Gounod was probably not in love with Anna, he nevertheless wrote her a number of tender and intimate letters. “It is at this hour of silence and recollection that ends the day and precedes sleep that I want to ask a few words of a tenderness… I want to tell you ‘thank you and love’ at this moment when each one enters in oneself; when the soul speaks louder than the spoken word.”

Gounod kept his wife informed regarding the evolution of his musical creations, but she seemed to have been not entirely interested and less than enthusiastic. This basic incompatibility fueled a persistent level of jealously in the relationship, prompting Gounod to hide his intense friendship with the sculptor Marcello—also known as the Duchess Castiglione Colonna—and with Mrs. Georgina Weldon. The couple had two children, and here is how Gounod described his marriage, “Everybody could not be happier with this union, which seems to offer the most serious assurances of lasting happiness; the family is excellent, and I have the good fortune to be loved by them.”