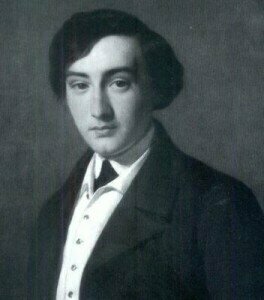 The most prestigious artistic scholarship in France, the “Prix de Rome,” was created in 1663. It originally was awarded in painting, sculpting and architecture, with music and engraving added in 1803 and 1804, respectively. The fortunate recipients, selected via a demanding process of elimination, would spend up to 24 months—all expenses paid—at the Mancini Palace in Rome. Charles Gounod was declared the “Prix de Rome” winner in 1839, and he quickly departed for Rome. Unbeknownst to Charles, the Hensel family was also getting ready to spend a year travelling in Italy. Fanny Mendelsohn, her husband Wilhelm Hensel, and their nine-year-old son Sebastian departed from Berlin in August 1839. Generally unimpressed by the state of Italian affairs, they arrived in Rome and on 7 December the famous French painter Jean-August-Dominique Ingres, the director of the Académie Française, invited the Hensels to the Villa Medici. After dinner the illustrious company retired to the music room and played a number of piano trios. As such, making music on Sunday evenings became an important part of Fanny’s Roman holiday. And it was at the Villa Medici that Charles Gounod and Fanny Mendelssohn-Hensel first met. 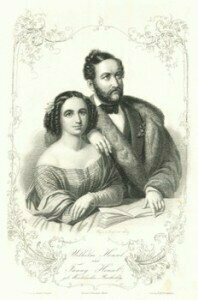 Gounod quickly became a good friend of the Hensel family, and Fanny describes the youthful exuberance of her young French acquaintance in her diary. “Few people know more sincerely and more foolishly to have as much fun as he has, never tired, never resting. During moonlight, we go out in the woods or to the Forum and the Colosseum. Gounod climbed on an acacia tree, and threw flowering branches at us, we sing a Bach concerto in chorus, and we walk rhythmically through Rome.” Gounod, on the other hand, was mightily impressed by Fanny’s musical facility. He writes in his memoirs, “Mrs. Hensel was an extremely learned musician and played the piano very well. Despite her small, slight figure she was a woman of excellent intellect and full of energy that could be read in her deep, fiery eyes. Along with all this she was an extremely talented pianist. She had rare powers of composition, and many of the “Songs without Words” published among the works and under the name of her bother were hers.” 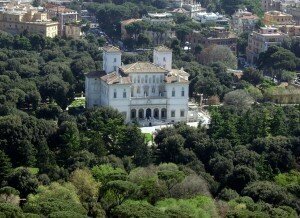 Gounod was thirteen years younger than Fanny and deeply missed his very domineering mother. Although he never mentioned an infatuation with Fanny, he was clearly attracted to her, and his feelings would appear to have gone beyond friendship. In turn, his admiration of Fanny, who never claimed or even implied that Gounod was in love with her, instilled her with a sense of self-confidence. As she writes in her diary, “I adore his lack of words to express the influence I have on him and how happy he is to be with us.” That influence was predominantly musical, as Fanny regularly played Beethoven sonatas during their Sunday gatherings at the Villa Medici. In addition, she introduced her young admirer to the music of Bach. Gounod writes, “Mrs. Hensel would sit down at the piano with the readiness and simplicity of one who played because she loved it. Thanks to her great gifts and wonderful memory, I made the acquaintance of various masterpieces of German music which I have never heard before, among them a number of the works of Sebastian Bach − sonatas, fugues, preludes and concertos − and many of Mendelssohn’s compositions, which were like a glimpse of a new world to me.”

Charles Gounod: Préludes et fugues pour l’étude préparatoire au Clavecin bien tempéré de Jean Sébastien Bach
Musical reunions at the Villa Medici aside, Gounod and Fanny spent a good deal of time partying and making excursions within and around Rome, and that included a trip to Naples. In April 1840, the Hensel family prepared for their return to Berlin and Fanny wrote, “Leaving Rome is costing us both a heavy struggle; I would never have thought that it could make such an impression on me. I will not conceal it from myself, that the atmosphere of admiration and respect with which I am surrounded has partly contributed to it. In my early youth I have never been so courted as now, and who can deny that this is very pleasant and gratifying.” With the actual day of departure approaching, Fanny once more confided in her diary, “I felt very tired and discouraged, so that I did not burst into tears, I went to the piano and played the Allegro of the Sonata in A major by Beethoven. Gounod implored me on his knees to play the adagio of the same sonata… Our German music produced on him the effect of a bomb bursting in his house.” The reciprocal influence of their respective Roman Holiday had far-reaching effects. Bach became a never-ending inspiration for Gounod, and Fanny quickly composed her famous musical diary of the year she spent in Rome!