The German city of Dresden in the late 17th and early 18th centuries was a center for music and the arts. The Elector and ruler of Saxony, Frederick Augustus I, brought together musicians, architects, and painters from all over Europe to his court. Under Elector Frederick Augustus I, who was also Augustus II the Strong of Poland (1670-1733) and his successor Augustus III of Poland (1696-1763), Dresden became a center for technology, for fine architecture, and for art collections and museums.

In the Dresden court orchestra was the violinist and later concertmaster Johann Georg Pisendel. Born 1687 near Nuremberg, Pisendel started his music lessons with his father, the town organist and cantor. He was a member of the Royal Chapel of Ansbach as a chorister at age 9, where he worked with teachers such as Giuseppe Torelli, who was also a teacher of Vivaldi. By age 22, Pisendel was in Leipzig for more studies and is known to have stopped off in Weimar where he met J.S. Bach. In Leipzig, he was a member of the Collegium Musicum, which had been founded by Telemann, with whom he was a life-long correspondent. His violin playing in the Collegium Musicum brought him to the notice of the concertmaster of the Dresden orchestra and in 1712, Pisendel was appointed “Premier Violiste u. Cammer-Musicus” for the Dresdner Hofkapelle. 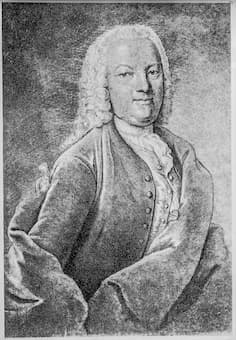 As a member of a select circle at the court, he accompanied Prince August around Europe when he did his grand tour. While travelling he picked up some unpublished works by Couperin in France in 1714 and in Italy in 1716-17, he met some of the top musicians in the country. When he returned in 1717, he sat next to the concertmaster at the first desk. When the concertmaster, Volumier, died in 1728, Pisendel took over his position and held it to the end of his life in 1755.

At Dresden, Pisendel was one of the leading musicians in one of the most famous orchestras of the day. He was a teacher of musicians such as Quantz and Benda who would go on to their own fame. He also amassed a wide-ranging personal collection of music scores which is still held in Dresden today.

We now come to the modern day. Musicologist and violinist Javier Lupiáñez, a student at Guanajuato University in Mexico, was encouraged by his advisor, the Vivaldi scholar Prof. Fabrizzio Ammetto, to delve deeper into the Dresden collection. Lupiáñez had begun to look into the Dresden collection in 2010 and started his doctoral work with Ammetto in 2017. Lupiáñez’ first discovery in the collection was a sonata by Vivaldi – unsigned but not unknown as it turned out to be Vivaldi’s sonata for violin, violoncello and continuo, RV 820.

As he dug further into the 2,000-some anonymous works in the Pisendel collection, Lupiáñez focused on the 80 anonymous sonatas for violin and continuo and discovered that at least one composer’s name could be put to some of the scores – in particular, the name of Pisendel. For such an important and influential musician, Pisendel’s musical archive included very little of his own work and very little has come down to us from other sources. As Lupiáñez has discovered, however, clues in the manuscripts can be followed and now he has brought to the public three new sonatas for violin and continuo. 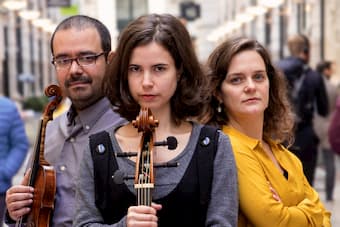 And, even better than discovering them, he’s also edited and recorded them. Lupiáñez, as founder of the Scaramuccia ensemble along with cellist Inés Salinas and harpsichordist Patricia Vintém, has recorded four Pisendal sonatas for violin and continuo. The music is very much in the Vivaldi tradition of four Slow-Fast-Slow-Fast movements and brings a real taste of music-making in the Baroque. Part of Lupiáñez’ discoveries in the Pisendel archive are Pisendel’s own notes about embellishments and ornamentation. Normally, these were held privately by performers and not shared except with their students. Accordingly, contemporary information about these invisible additions to the music is rarely found, so this discovery is an important insight into Pisendel’s own performance practice.

The ensemble’s first recording was their recreation of Pisendel’s European tour with the Dresden prince, entitled 1717. Memories of a Journey to Italy. It contains music by Albinoni dedicated to Pisendel, a solo sonata Vivaldi created for Pisendel, a sonata by Valentini that was dedicated to Pisendel’s teacher Montanari, and other works that haven’t been heard for 3 centuries.

Join Scaramuccia for a trip back 400 years to the glory days of the Dresden court and its marvelous violinist, Johann Georg Pisendel.

The Scaramuccia recordings can be ordered through this website: https://www.snakewoodeditions.com, either as physical CDs or digital downloads.