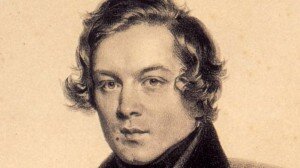 There’s a special poignancy to Schumann’s Geistervariationen (“Ghost Variations”). Dedicated to his beloved wife Clara, they were written just a few weeks before he was committed to a lunatic asylum at Endenich, and were the last piece of music he wrote.

The events leading up to and surrounding Schumann’s committal to the asylum (he cast his wedding ring and then himself into the freezing river Rhine in a suicide attempt during the composition of the Ghost Variations) led Clara to jealously guard the manuscript, almost in the manner of a holy relic, and would not permit the variations to be published. The first edition finally appeared in 1939.

Throughout his life, Schumann had been plagued with what we would now call manic depression or bipolar disorder. Aware of these contrasting sides to his personality, he gave them names: “Florestan” was the energetic and passionate artist who could write a symphony in just four days; “Eusebius” was the depressive introvert. By 1854, the year the Geistervariationen were composed, Schumann teetered perilously on the brink between madness and lucidity, and he was well aware of his unstable mental condition. He had on several previous occasions begged Clara to have him incarcerated. On 17 February, he rose in the middle of the night and wrote down a chorale-like “spirit theme”, which he believed was dictated by him by the ghost of Mendelssohn or Schubert. But by the morning, the voices of angels in his head had turned into the hideous voices of “tigers and hyenas”.

Although he believed it to be completely new, the theme was in fact one of his own. He had used it in his String Quartet, Op. 41 no. 2 (1842), in his Lieder-Album für die Jugend (1849), and, in the slow movement of his violin concerto, written just four months earlier. Delighted with the “new” theme, he immediately set about writing a set of variations upon it.

“A beautifully moving and devout theme” (Clara Schumann) opens the work with a chorale-like simplicity, intimate and introspective. In the first and third variations the theme has different triplet accompaniments, while the second variation uses the theme in a canon. In the first three variations, the theme remains completely unchanged, only that it is heard in the left hand in the third variation. In the fourth variation, the only one in a minor key, the chorale-like quality returns and the theme is hardly changed. The harmonies are rather static, giving the music a suspended quality, as if it might slip away at any moment. The fifth is more florid and agitated, but no less expressive, the theme dissolving into the semi- and demi-semi-quaver figures in the right hand and becoming less and less obvious until it finally disappears, and the music fades into the distance.

Schumann was admitted to the asylum at Endenich soon after completing the Geistervariationen and remained there until his death on 29th July 1856. The music seems to reveal so much of the composer’s fragility and melancholy.

Brahms: Variations on a Theme by Schumann, Op. 23

A number of works quote the Geistervariationen, including Brahms’ Variations on a Theme of Robert Schumann, Op 23, for piano four-hands, and Seven Fragments for Orchestra in Memory of Robert Schumann (1989) by Aribert Reimann. The work is not performed very often in concert and notable recordings are those by Andras Schiff (2011), Piotr Anderszewski (2017) and, most recently, Igor Levit on his album Life (2018).