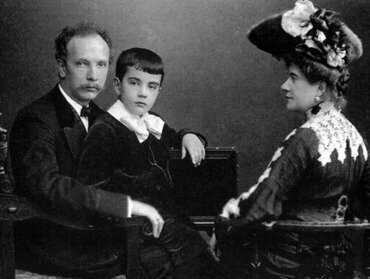 Throughout his life, Richard Strauss surrounded himself with beautiful women!

Although his heart securely belonged to the soprano Pauline de Ahna, his formidable wife of more than 55 years, he nevertheless created an illustrious gallery of heroines and brought them to the operatic stage. Even his best male roles—“Octavian” in Der Rosenkavalier, and the “Composer” in Ariadne auf Naxos—are trouser roles written for women!

Strauss knew how to exploit the drama, radiance, eroticism, tenderness and humor of the female voice, and generations of great women singers have been drawn to his music in recitals and on the operatic stage. Scholars and critics have suggested, that Strauss discovered the voice of a woman within himself, and sopranos are unanimous in that “nobody understands them for who they are, as Strauss does.”

When Strauss explained that he “thanked the Almighty Creator for the gift and inspiration of the female voice,” he was almost certainly thinking of his wife. Her presence is clearly felt in the power and sensuality with which he wrote for the female voice, whether in the frenzied final scene of Salome, the celebrated trio towards the end of Der Rosenkavalier, or the ecstatic and soaring lines of his solo song Cäcilie, which was his wedding present to Pauline. What Strauss discovered, in essence, was the voice of the modern woman! “Salome” and the “Marschallin” are erotic, exotic and have the strength to control their own lives. And “Elektra,” the hysterical virgin, who rejects and hates the feminine norm at the time, became a template for 20th-century psychoanalytical studies. “Arabella” is a poor little rich girl, who is looking for a husband in Vienna during the declining years of the Austro-Hungarian Empire. Her father intends to sell her in order to bail out the collapsing family fortunes, while “Arabella” is looking for a dominant partner.

Following the dismal reception of Die Aegyptische Helena, Strauss wanted to write an erotic comedy, with a sympathetic central female character. “Arabella” is a thoroughly hysteric, yet modern character. She is attracted to men, but when they start to respond, she pushes them away. In a Freudian sense, she experiences a profound fear of sexuality, brought on by years of family abuse. Her father is a compulsive gambler, who wasted the entire family fortune, and his mother spends her days consulting fortune tellers. “Arabella” is to be prostituted to the highest bidder to salvage the financial mess. The real victim of this intolerable situation, however, is the younger daughter Zdenka, who has been raised as a boy!

Despite its apparent complexity, Strauss’s music expresses and embraces the most intimate thoughts and feelings of both female characters. Just listen to the bright and silvery sounds—deliberately scored in the high tessitura—in the famous duet between Arabella and her sister in Act 1. Strauss’s musical portrayals were so convincing, that the choleric and chronically jealous Pauline threatened divorce after a mere six years of marriage. Pauline was convinced that her husband, at age 36 the most celebrated and important living German composer was cheating on her. She was certainly convinced that the basis of the steamy love affairs in his tone poems and operas had their roots in Richard’s infidelity. The couple even separated for a time, before Strauss offered his wife the Sinfonia Domestica as a gesture of reconciliation, a reaffirmation of a bond that had been threatened.

In the end, all paths lead back to Pauline, and Strauss’s last song, Im Abendrot (At Sunset) describes an elderly couple spending the quiet evening of their lives together. “Is this perhaps death?” asks the soprano, while two flutes evoke a pair of larks rising towards the heavens. “It was his last and perhaps most perfect offering to his beloved muse, the soprano voice.”