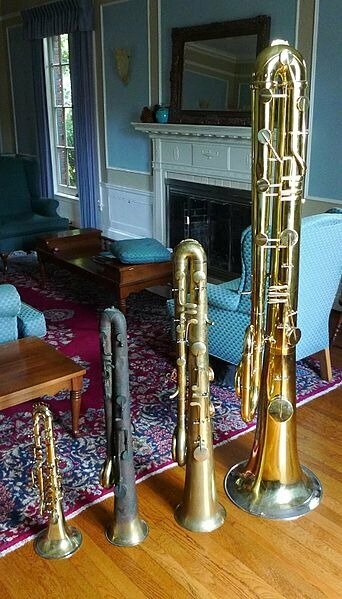 We think of instruments as being so well-established (look at any orchestra), that we don’t think about the instruments that were there and are now gone, or have been replaced with something else, or just changed into something else. 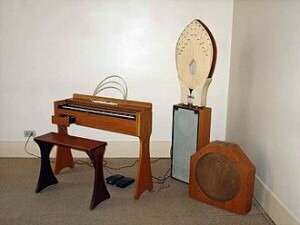 The ondes martenot, was an early electronic instrument invented in 1928 by Maurice Martenot. The last instrument was made in 1988, but the instrument is still taught in France. The most famous composer who used the instrument was Olivier Messiaen. Other French composers who wrote for it include Arthur Honegger, Darius Milhaud, and Pierre Boulez. Because it is easier to use than many other early electronic instruments, it often replaces them in new performances. Messiaen’s Fête des Belles Eaux, written for the 1937 International World’s Fair in Paris, uses six ondes martenot.

The glass harmonica is a crystallophone. You’ve made one yourself when you’ve rubbed a wet finger around the rim of a wine glass and made that ethereal shimmering sound. Now imagine a whole set of glasses, tuned so that you could play melodies. The first performer on the glass harmonica appeared around 1740. Mozart wrote for it, as did Beethoven. The sound is like a high-pitched organ – if you didn’t know what was being played, it would be difficult to discern. The pitched bowls are set on edge and turn, as if on a lathe, while the musician makes them resonate with his fingers.

The baryton was an instrument Haydn had to know well and to write well for, because it was the instrument that his employer, Prince Esterhazy, played. From the picture, you can see it looks rather like a viol, but with rather too many strings. Some strings were to be bowed and others to be plucked. The plucked strings run up the back of the neck and were played with the thumb.

If you listen at 1:18, you can hear the plucked strings sound, just as he gets through his little cadenza.

Somehow, we have lost a bit of life when we lost these instruments. But, when you imagine the tuning problem for the 16 strings of the baryton, or what happens if you (figuratively) break a “string” on the glass harmonica, then you might understand a bit better why they softly and suddenly vanished away.