Playlists
Composers by the Numbers
by Maureen Buja October 13th, 2015

We have the 3 Bs, The Five, and the Six. They’re all from different countries and cover some 300 years. Do you know who they are? 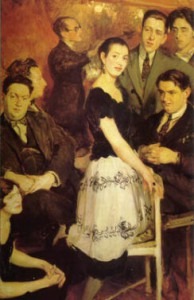 Some samples of the new nationalist sound:

Rimsky-Korsakov: Russian Easter Festival, Op. 36 ((Anima Eterna Orchestra; Jos van Immerseel, cond.)
Borodin: In the Steppes of Central Asia (Anima Eterna Orchestra; Jos van Immerseel, cond.)
Mussorgsky: Pictures at an Exhibition: X. The Great Gate of Kiev (New York Philharmonic Orchestra; Leonard Bernstein, cond.)
The Six or Les Six, in French, was the school that was the only to include a woman. Composers Georges Auric (1899-1983), Louis Durey (1888-1979), Arthur Honegger (1892-1955), Darius Milhaud (1892-1974), Francis Poulenc (1899-1963), and Germaine Tailleferre (1892-1983) were names as a group by critic Henri Collet, who saw them as a change from the overwrought style of Wagner and the impressionistic style of Debussy and Ravel.

The composer Erik Satie is credited with bringing them together for a concert in 1917 in a painter friend’s studio. Satie assembled a group of composers that he named “Les nouveaux jeunes.” It was a true assembly of early 20th-century artistic talent because the walls of the studio were decorated with canvases by Picasso, Matisse, Léger, Modigliani and others. With the greatest art of the day, the concerts had the most innovative music of the day.