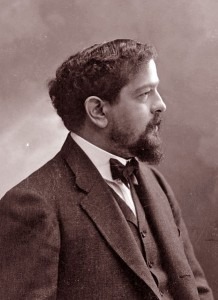 As a composer in the late 19th century, Claude Debussy (1862-1918) worked on the cusp of the new directions taking place around him in France: salon music mixed with the new art styles of impressionism brought forth from him piano music that paints pictures. Not pictures of things, but pictures in light and sound. We took a look at Debussy’s Preludes Book I and II before, let’s take a look at another essential Debussy’s piano music – Suite bergamasque. 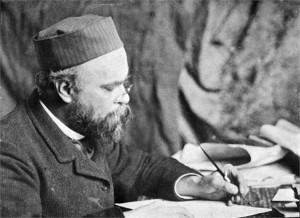 Debussy’s Suite bergamasque, written in 1890 and revised in 1905, has a curious retrospection in some movements and a brisk modern air in others. The title, Suite bergamasque, immediately conjures up mental images of poet Paul Verlaine’s Fêtes galantes collection and the painted world of Antoine Watteau, who created so many images in that genre. Watteau’s rococo masterpieces of pastoral love (in fancy dress) can be imagined as depicted in the music of Debussy, particularly in the 3rd movement.

The opening Prélude is, as many writers have said, quintessentially Debussy. The harmonies, in particular, call to mind his ‘floating world’ aspect.


The second movement Menuet, although given a name that recalls 18th century dances, is not the menuet of Mozart. This is a late Romantic menuet, and the advanced harmonies used show us that difference.


The most famous movement of the Suite is the third: Clair de lune. This moonlight piece was originally given the title “Promenade sentimentale,” but it is in its reference to the moon that we most fondly recall it. The feeling is static, so it could never have been a sentimental promenade, but yet there’s a kind of glow to it that makes us imagine a setting, perhaps, of the moon on water. 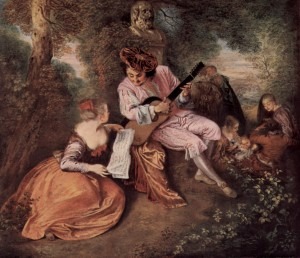 Watteau: The Scale of Love

The final movement, Passepied, originally bore the title ‘Pavane.’ The title may have been changed after the success of Maurice Ravel’s 1899 Pavane pour une infante défunte but the basic feeling of the piece also argues for the change. A Pavane was a slow processional dance, well known since the 16th century, whereas a Passepied, was one of the fastest triple-time dances in the 18th century French court. This re-appearance of the Passepied was one of the first in modern music. It appears in later music by Stravinsky, Prokofiev, and Christopher Rouse.


The work is a curious mixture of the modern and regret for the past. Both Verlaine and Watteau were depicting, in poetry and painting, dream worlds of the 18th century. The first verse of Verlaine’s poem ‘Claire de lune’ described masked party-goers who play the lute and dance, almost sad, in their fantastic costumes and we have the world of Watteau and the world of Debussy all at once in his piano music.