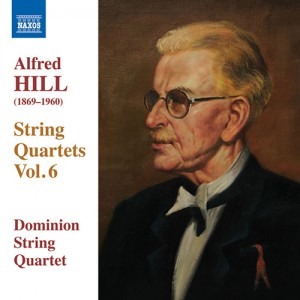 String Quartet No. 17 in C Major
I. Adagio – Allegro

Alfred Hill was the leading Australian-born composer of the Late Romantic era. During his studies in Leipzig from 1887 to 1891, he encountered luminaries such as Brahms, Dvořák, Tchaikovsky and Strauss. His 17 String Quartets, the first significant examples of the genre from Australasia, are beautifully crafted works which draw on the legacy of European chamber music. With their Schubert-like melodies and rhythms, the outer movements of String Quartet No. 15 frame a pair of harmonically more adventurous movements, No. 16 ‘Celtic’ includes a setting of a 17th-century Irish song followed by an Irish Jig, while the poignant No. 17 concludes with a brief quotation from Dvořák’s ‘New World Symphony’. This is the final volume of the Dominion Quartet’s acclaimed recordings of the complete Alfred Hill String Quartets.