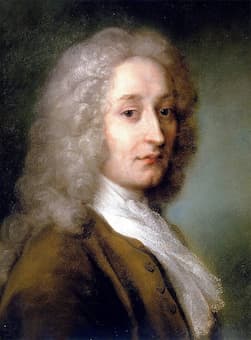 Antoine Watteau (1684–1721), who died 300 years ago at the young age of 37, was one of the most original and brilliant artists of the eighteen-century. Rising from an obscure provincial background he achieved fame in the French capital, and he had a lasting impact on the development of Rococo art in France and throughout Europe. His sensuously painted idylls “conveyed courtly love and ideas of reverie, longing, and utopia at a time of aristocratic indulgence and hedonism.” 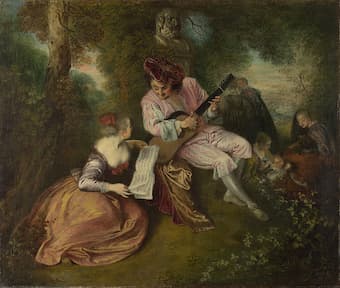 In 1717, the French Royal Academy carefully examined Watteau’s application to join the organization. His depiction of elegantly dressed aristocrats flirting in the landscape—essentially a stage-like setting within a naturalistic panoramic scene—established a brand new genre. As such, the Academy created the new genre “fêtes galantes” in order to accommodate the painter rather then to reject his application. Watteau places his courtship parties within scenes of the mythological land of Arcadia, where humans supposedly lived in leisurely harmony with nature. 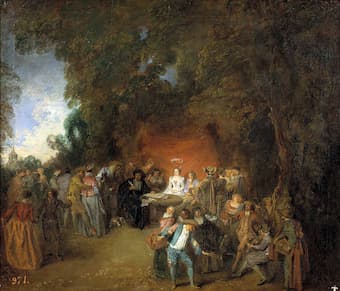 Watteau was the son of a roofer, born in 1684 in Valenciennes, a city in northeast France that had long been part of Flanders. It has been suggested “his father was a violent man, and that Watteau never made any references to his family in his work.” He did show talent for drawing at an early age and in 1702 left for Paris to begin his real vocational training. 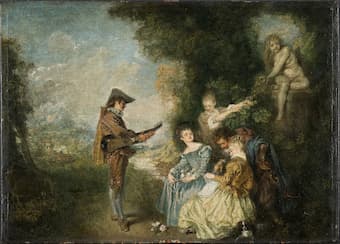 “He was a reserved young man, not formally educated or socially connected, but he was highly intelligent, curious, observant, and he had taste. He loved music, opera and the ballet, was an enthusiastic and catholic reader, and importantly, he had no intention of ever returning to his home town.” Initially, Watteau was involved in the mass production of crude copies of devotional paintings, and by 1704 he studied with Claude Gillot (1673–1722), “an innovative designer with a brilliant sense of line.” He subsequently also worked with Claude Audran III (1658–1734), a designer of ornament and interior decoration. 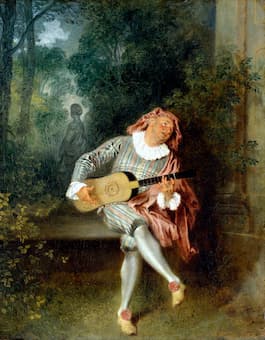 Significantly, Gillot introduced Watteau to the Commedia dell’Arte, a popular comedic theater based on familiar stock characters. The Commedia dell’Arte characters inhabiting his canvases reenact scenes from the theatre, and they are shown in the context of a playful commentary where buffoonery and cultural norms receive a whimsical twist. Watteau had great passion for music, and the bittersweet depiction of “Mezzetin” the wistful prankster, becomes an evocation of the anguish of unrequited love. 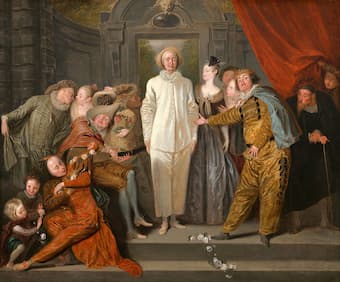 Watteau competed for the Prix de Rome and he did win second prize in 1709. However, to his great disappointment he was never sent to Italy for study. Relying on a number of important patrons and protectors, Watteau copied works by Rubens and others for private collections. Watteau was remarkably productive, producing roughly 200 oil paintings, many also preserved in engravings and copies; Watteau is also believed to have produced thousands of exceptional drawings. By 1719, Watteau was seriously ill with tuberculosis and it has been suggested that he traveled to London in 1720 to consult the most fashionable physician of his time. Unfortunately, said treatment did not improve his condition and he died on 18 July 1721. 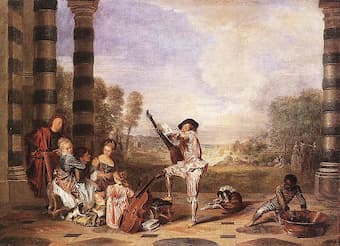 Watteau’s utopian vision of natural harmony was directly influenced by contemporary opera, ballet and theater. He incorporates music in subtle and complex ways, “embodying the physical and psychological nuances of melody with the fluid use of paint.” His painted melodies unfold as an art of process rather than product, and they conjure auditory moods or atmospheres. Scholars have suggested that the music of his contemporary François Couperin, “combining Italian and French sensibilities and containing melodic intonations, echo the visual cadences of Watteau.” 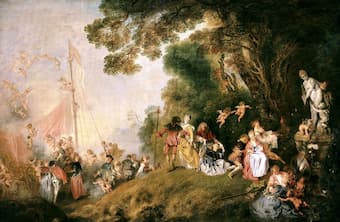