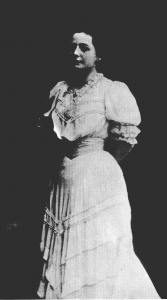 Natalya Sekerina emphatically rejected Alexander Scriabin’s proposal of marriage, and the composer was devastated. In a long letter, after many years had passed, Natalya writes, “That beloved man could never have had happiness, if I had been afraid to say ‘no’ to him. And what kind of wife would I have made him, a genius? My subconscious truly pointed the right path and led me to a correct decision.” As a direct result of Natalya’s rejection—and in grim defiance—Scriabin determinedly defined the philosophical and musical platform that would serve him for the rest of his life.

“I awaited a revelation from Heaven. It came not. Well, what then? I sought eternal truth and asked of people; they knew no more than I. Well, what then? I took comfort in memories, but once I used them, they vanished. Well, what then? I take my leave of you and ask no further redress I am alive. I love people. I love them all because through you they have suffered I thank you for all the fears, which your trials and tribulations aroused.”

Armed with this newly found confidence and the knowledge that Natalya had married somebody else, Scriabin threw himself headfirst into the European nightclub scene. In Paris he tells of “a tall and lean young thing wearing a lilac-colored necktie. His hair was so long and straggly that I swear it caught fire from a candelabrum on the piano.” In Berlin, he fell in love at first sight with a “ravishing girl, very intelligent and cultivated” whose name is only known as “M.K.F.” Scriabin proposed marriage, which was promptly accepted, but he immediately departed for Amsterdam under darkness of night. Once he returned to Russia, he quickly fell in love again. This time, it was the talented pianist Vera Ivanovna Isakovich that stole his heart. Vera had a rather outgoing personality, and asked Scriabin to teach her his music. In return, Scriabin asks for her hand in marriage. The period of engagement was full of doubts, with a close personal friend remarking, “I just don’t know about this proposed marriage. His fiancée is a very good sympathetic sort of girl and loves him very much. My one question is how long will it last? If it were right for him, it would lead to a quiet and happy life. But does it?”

Since Alexander and Vera had diametrically opposed personalities, and neither of them had any money, friends and relatives did their best to break up the relationship. A number of intrigues and subterfuges backfired, and the couple announces the wedding date for 15 to 20 August 1897. Scriabin sent out gold-embossed invitations for the five days of wedding formality required by the Russian orthodox services. The couple decided to honeymoon in the Crimea for two weeks and then travel to Europe. Although they enjoyed the atmosphere of Vienna and Paris for three months, Vera was constantly homesick. “I shall be happy to return to Russia. In my opinion we Russians are too modest and too little inclined to see all the things we have, which are better than anywhere else.” The couple gave a number of highly successful joint public concerts, but financial troubles were showing. When Vera was seven months pregnant, she insisted on a return to Russia, and the couple left Paris on 22 April 1898. A girl named Rimma was born on 15 July 1898, and Vera gave up playing the piano for a while. With no steady income, the couple lives in a tiny apartment. The baby was fuzzy, and the couple constantly quarrels about money. Scriabin starts going out a lot, attending parties and other entertainments day and night. On one such occasion, he meets the 15-year old, and strikingly beautiful Tatyana Schloezer. This chance encounter would have rather serious repercussions in years to come.

But in the meantime, Scriabin was offered a highly prestigious professorship at the Moscow Conservatory. His teaching and concertizing activities regularly took him away from home, and the couple saw less and less of each other. Scriabin faithfully wrote to his wife whenever they were separated, but his tone of voice was growing increasingly impatient. “I am very angry with you. I waited all day long for a telegram in vain. I go to bed with an uneasy heart, and probably will not sleep for hours.” His concern was not for the wellbeing of his wife, but for his own peace of mind. By January 1900, Vera was expecting their second baby Elena, and by April 1900 she got pregnant for a third time. Yet the distance between the couple widened. Concordantly, Scriabin’s love for Tatyana grew all-consuming, but I’ll spare you a detailed description of this emotionally harrowing time. Needless to say, however, in Scriabin’s mind, it was all Vera’s fault! By 1904, Scriabin and Vera had relocated to Switzerland, but were quickly legally separated. More on Vera and Tatyana in our concluding Scriabin “love” episode next time.