The Russian composer Alexander Scriabin was very interested in relating color and sound. Scriabin had synesthesia – he actually heard in color; his friend Nikolai Rimsky-Korsakov had the same sense. In 1910, Scriabin codified his sound and color senses and composed a work that would use both aspects in performance: Prometheus: Poem of Fire. He started writing it in 1909 and completed it in 1910.

As you remember, Prometheus was the titan who stole fire from the exclusive use of the gods on Olympus and brought it to mankind.

Scriabin developed his clavier à lumières (keyboard with lights), also called in the score tastiéra per luce, where both colors (red, blue, etc.) and effects (lightning, sparkles) were controlled off from a keyboard. One copy of this instrument was developed for the première in New York in 1915, created by Scriabin’s friend Alexander Mozart, an electrical engineer. It was very primitive and has largely been abandoned in performances of the work.

The twenty-minute long work is part symphonic poem and part piano concerto, and includes, in additional to the regular symphony players, a pianist, an organist (and the tastiéra per luce player) and a chorus.

This list is not to say how Scriabin himself looked at color, since we find that there’s actually a pattern hidden in plain sight (or before our very ears) – when you put the colors in chromatic order (ROY G BIV, or Rainbow order), we find that they create a very common musical idea: the circle of fifths, which has been guiding music since the Baroque era. 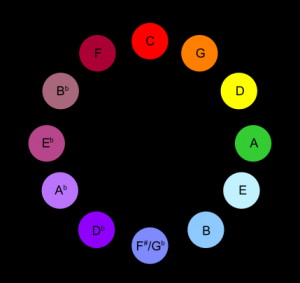 A new version of the instrument was created for a performance of the work in 1998 in New York by the American Symphony Orchestra under Leon Botstein. Unfortunately, the keyboard colors and the piece suffered from coordination problems and Scriabin’s vision of music and lights didn’t come to its true realization.

The piece begins with his “mystic chord” (A-D#-G-C#-F#-B) and everything in the piece derives from that set of notes. One commentator thought that piano part, which often solos with music that is much more playful than in the orchestra, represents Man – “dancing to the rhythms of the cosmos.” The piece ends, rather unexpectedly, in F# (bright blue), “suggesting the triumphant presence of the human within the cosmos.”

To see this realized in accordance with Scriabin’s score, but with modern multi-media techniques, Yale University was able to do a credible performance in 2010, a mere century after Scriabin started work on the piece. In this performance, the luce’s part is represented by the circle with rays that is centred behind the orchestra.