Artists Interviews
Only Cello With Valérie Aimard
by Maureen Buja May 22nd, 2021 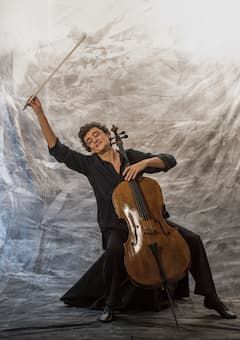 We’ve caught up with French cellist Valérie Aimard before, first to talk about her Cello Kids program and then about her work as a …… Mime. In her other life, she’s a professor of cello at the Conservatoire Maurice Ravel in Paris and teaches chamber music at the Conservatoire national Supérieur de Musique et de Danse de Paris (CNSM).

Her latest project, unveiled in December 2020 on YouTube, is called Only Cello and that’s exactly what it is – works for solo cello from the entire range of the cello repertoire, from the Baroque to yesterday.

Although this seems like a perfect COVID-19 project, she came up with the idea for Only Cello long before COVID-19 was a reality. Following an intense engagement with the Bach cello suites in 2017, which culminated in a performance of all the suites in a single day, she looked the repertoire she’d played for the last 30 years. Many pieces she’d known for a long time, particularly for the 20th century, where there had been a resurgence of cello writing. She conceived of her ‘Anthology’ of solo cello pieces as a kind of history of solo cello works in the summer of 2018 and started assembling the repertoire. She sought to find works that were related and then elaborated on her choices. She started practicing and then playing the works in public. Once COVID-19 hit, it became a perfect time for realizing the project. 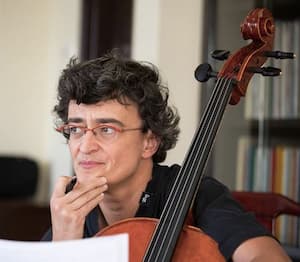 The channel is divided into different sections: ‘The Baroque Cello,’ ‘1915-1980,’ ‘1980-2020,’ and ‘The Composer Cellists.’ Historically, the cello repertoire had its start in the 1680s in Bologna with Pietro degli Antonii and Domenico Gabrielli, and one of the high points of the Baroque cello is Bach’s six Cello Suites. After that, the solo cello repertoire languished for a long time. In the mid-20th century, however, the rise of performers such as Mstislav Rostropovitch and Gregor Piatigorsky brought attention back to the instrument. Next, cellists such as Siegfried Palm and Boris Pergamenshikov extended the modern repertoire with their work with composers such as Ligeti, Penderecki, and others.

On her Only Cello channel, Valérie Aimard will present an enormous range of music. If issued on CD, this would be a 5-CD set of more than 5 hours of music. That’s a daunting sell in any market. As a YouTube channel, however, Only Cello puts the listener in a unique position – you don’t just listen; you face the performer as the performer faces the music. It’s like having your own private concert by a great performer in a private salon. 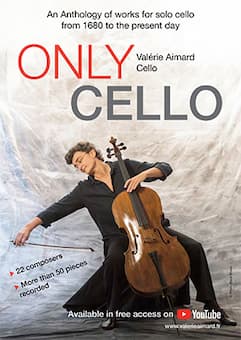 On screen, she makes it look effortless. Even the most extreme of techniques come off easily and she said this was the result of a lot of practice (3 to 4 hours every morning), then making the recordings and editing them to her satisfaction. She said that making a video recording was much more demanding than just sitting down before a microphone. Every aspect had to be considered, from the video setup to the lighting and even to the clothes she would wear. She had to take care that the work began well and that when things became difficult, she didn’t get angry on screen. She said it’s rather like an iceberg, the 5 minutes of visible playing have enormous investments of time supporting them.

In addition to her performance, Valérie Aimard has added her notes on the music. This isn’t the usual platitudes copied from the usual sources, but her own performance notes. For a composer that she’s worked with, such as György Kurtag, she gives you her rehearsal notes from him – not only about the pitches but also about the silences between them.

The intensely committed cellist comes out in her recording of a work by Kryzsztof Penderecki (1933-2020) created for the cellist Mstislav Rostropovitch, Per Slava.

To see her at her most playful, see Prokofiev’s Marche pour enfants, which was transcribed by Piatigorsky for cello.

Currently the channel has nearly 30 tracks and Valérie Aimard is planning on finishing the project with 60-some works. When we asked if her Mime work would enter into any of Only Cello, she said she had some plans….. So, keep an ear (and an eye) on Only Cello, a unique resource for a repertoire that needs to be far better known.