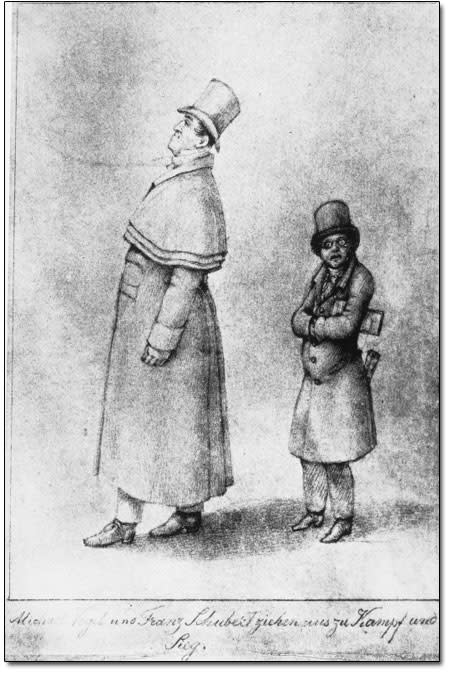 Schober: Michael Vogl and Franz Schubert
Go Out for Battle and Victory (ca. 1825)

Schober was an Austrian poet and writer and supplied Schubert with the libretto for his opera Alfonso und Estrella and with nearly 40 song texts. Vogl and Schubert became fast friends and Schober caricatured the dissimilarity between the two virtuosos. Schubert was as impressed with Vogl’s singing as the singer was impressed with Schubert’s music. Even after the death of Schubert, Vogl continued to sing his music. The two died on the same day, 19 November, 12 years apart. 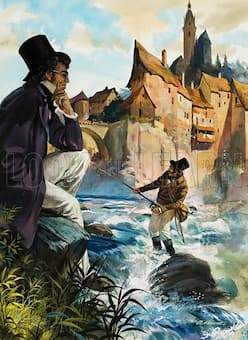 Schubert ponders on the sad fate of a trout on the end of an angler’s line, by Andrew Howat © Look and Learn

In 1819, Schubert and Vogl visited Vogl’s home in Steyr and Schubert started working on his new piano quintet. He intended it for Sylvester Paumgartner, a friend of Vogl who was a local musical amateur. He played the cello and various wind instruments and held musical evenings at his home. It was at Paumgartner’s request that the work has the same scoring as Johann Nepomuk Hummel’s Piano Quintet in E flat major, i.e., violin, viola, cello, double bass, and piano, probably to make it easier to get performers together. It was also Paumgartner’s idea that the theme and variations fourth movement be based on Schubert’s song Die Forelle (The Trout), which was a setting of a poem by Christian Schubart.


In the song, a watcher on the shore sees a fisherman catch a fish and sees in it a betrayal of the fish’s home by the undeterred hunter. A further verse that Schubert didn’t set draws an analogy between the fish and young maidens who are caught by treasonous boys.


The work was later taken up by Franz Liszt as part of his piano transcriptions of Schubert songs and he made two different versions of Die Forelle.


The conjunction of a willing performer who knew the repertoire of the composer, a composer who was willing to accommodate the performer, and the singer who brought them all together was a happy source of a song becoming a beloved piano quintet.