What can a musician learn from a mime’s art and training?

We were speaking the other day with Valérie Aimard, cellist with Cello Kids and learned that some 15 years ago, she’d taken up another discipline: Mime. As she said about her life, she’s been a cellist forever but then mime came. 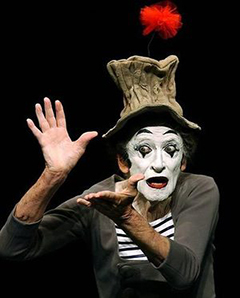 Valérie attended a performance by the great French mime Marcel Marceau at the Olympia in Paris. For the audience at Marceau’s show, his intensity and concentration captured their attention completely. This caused Valérie to think about the comparison between a mime’s art and training. An actor has body training and learns how to move on stage, how to make the body and face express feelings and emotions. The musician, on the other hand, doesn’t have any training about the body at all. The training is all in relation to the instrument. What could a musician learn from body training? What can a musician, who sits all the time, learn from a profession that’s all about movement?

When she started down the path towards mime, Valérie wanted to keep her two arts separate. But, in the end, the two disciplines influenced each other so much that she has now joined them together. As a cellist, she sits and plays. Between her and the audience the music flows through the cello and both act to separate her from the audience. As a mime artist, there is nothing except her and the audience. 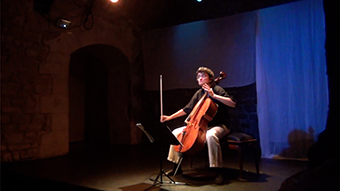 Her first solo show as a mime in 2009, Bulles (Bubbles), made a careful connection between her actions and her music, using it both as background and for accents for her mime actions. Its popularity brought it back in 2014 and 2015.

A 2017 show, Quelle Histoire!!! (What a Story!!!), brought her cello onstage and she alternated playing and miming.

Mime permits her to do something different – to be on stage but not the manner that she’s always been on stage. This second show had ‘musical inventions’ by French composer Guy Reibel, who is helping her bring her voice on stage. As a composition teacher at the Paris Conservatoire for more than 40 years, he understands how to focus and channel creativity. She’s bringing the voice into her cello music, so has Cello + Text, Cello + Voice, and Cello + Word + Mime in a way she never has before. This performance is a perfect combination of all her talents as a performer. 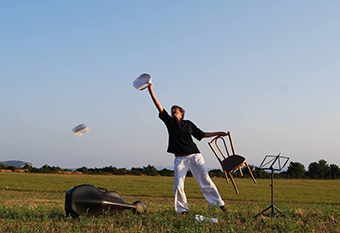 In the 1990s, as she began her exploration of mime, she made that antithetical discovery: the more relaxed she was, the more intensely she could play. Her study of mime brought her back to an older means of teaching – mime isn’t something you take in classes with lots of people all the time, but rather something that is passed from teacher to student. Now, as an experienced mime artist, she is using it in her teaching of the cello to help students find their individuality. When she gives Cello Masterclasses, she also offers a Mime Workshop to teach expression and coordination, and, most importantly, imagination to the students. Just as mime has freed her from the cello’s perceived constraints, she seeks to show students how to free themselves from their instruments and be freer with their bodies. 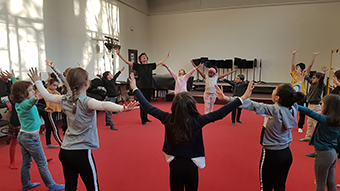 A mime creates his own way of moving on stage. A musician is never taught this but needs to think bigger to develop their own individuality – they’re used to doing this with their music, that’s interpretation, but how do you make it personal?

When Valérie started down this road towards mime, she never expected how important it would become. She never dreamed, as a child, of being an actor. However, the extraordinarily long mime tradition, dating back to the Aeschylus and the theatre of the ancient Greeks, has a life as long as that of music. Although many of us think of the whiteface character created by Marcel Marceau as the typical mime, mime today has split into many different styles. Valérie performs without makeup, saying that once she involved her cello, it was one more thing she didn’t want to keep track of.

Everyone has to find their own means of expression. For Valérie, it’s mime and her cello. For others it may be yoga or tai chi or sports. Finding work for the musician’s body to learn leads to freedom of expression and emotion and can only benefit the art.