It was almost a miracle that Pablo Casals survived his childhood. He was born on 29 December 1876 in Vendrell, a town near Barcelona, with his umbilical cord wrapped around his neck. Fortunately, “the village midwife was skilled enough to save his life.” Nine of his brothers and sisters were not that lucky, as they died at birth or in early childhood. As a biographer writes, “such horrendous mortality rates were a common event at that time in provincial Spain, where medical help was nonexistent.” 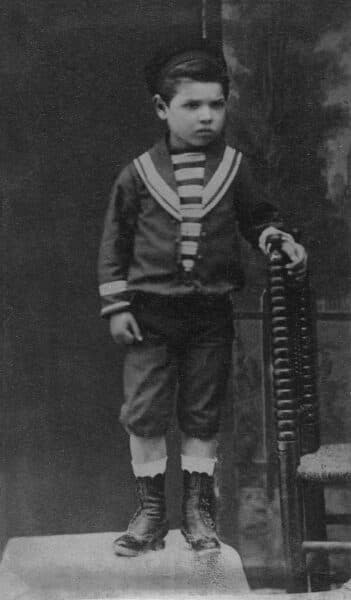 Pablo Casals as a kid

Pablo, christened “Pablo Carlos Salvador Casals y Defilló,” but affectionately called “Pau” displayed rare musical talent at an early age. He sang before he spoke, and he received his first piano lessons from his father at the age of four. Shortly thereafter, he composed his own music and began to sing in the church choir. By the age of 10, Pablo was a capable performer on the piano and the violin. At the same time, a rabid dog bit the boy. Thankfully, his father had read that the scientist Louis Pasteur had just developed an anti-rabies serum. He raced to Barcelona with his son, and over the next two days, the boy endured a series of painful injections.

How Casals Fell in Love With the Cello

Casals had been fascinated by all kinds of instruments, but when a trio came to town to perform at the local social hall, he saw, heard, and fell in love with the cello. His father organized a three-quarter-size instrument, and for months Pablo struggled to teach himself how to play. While his mother insisted that Pablo should study music in Barcelona, his father had reservations as he had arranged for the boy to begin an apprenticeship with a carpenter. In the end, the family boarded a bus to Barcelona and found lodgings with relatives.

Studying Cello Under the Tutelage of José Garcia 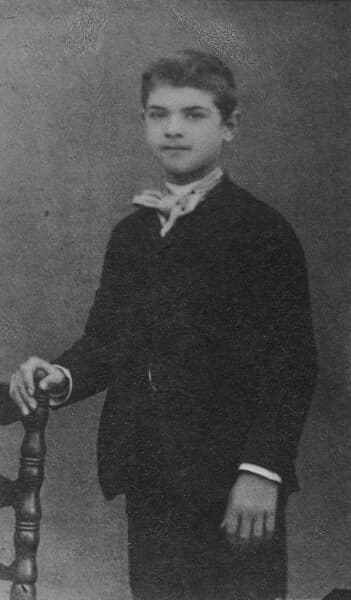 Pablo Casals at the age of 11

Pablo started lessons with José Garcia, the cellist he had heard in Vendrell. Already at his tender age, Pablo revolutionized cello playing. He was told to keep his bow arm close to his body, his elbow down and his wrist high. To help him remain in this position, a book was placed under his right armpit. “Pablo hated the stilted posture and the tone it produced sounded very cramped.” As such, he experimented with a more natural and freer position and convinced his teacher of the advantages.

Pablo also experimented with his left hand, as he was not satisfied with the standard method of playing three notes and then slid down to the next position on the cello. “Pablo hated the sound of the slide, and instead extended his fingers to reach down the string to at least one more note in each position.” We should give high credit to his teacher for allowing his highly talented student to develop his own technique. Alongside cello lessons, Pablo also improved his piano playing and studied harmony, all part of his plan to become a composer. 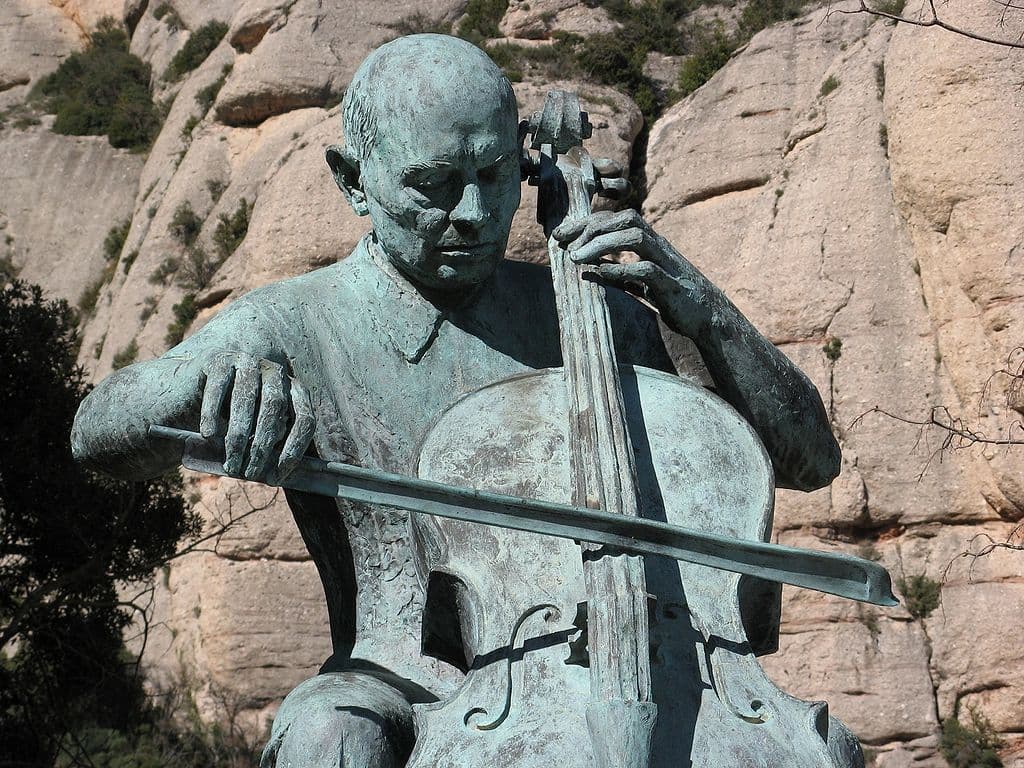 His first public appearances took place at the Café Tost, where a trio was playing one night of classical music each week. Word of the young prodigy traveled fast, and after only three years of study, Casals was a remarkably advanced cellist. The pianist Isaac Albéniz, himself a former child prodigy, heard the boy perform at the Café Tost and he urged his parents to take the boy to London to perform. His parents politely refused the advice, and on 23 February 1891, Pablo performed his first solo recital at the age of fifteen. Around that time, he received his first full-sized cello, and in a pile of scores, he stumbled on a work entitled “Suites for Unaccompanied Cello” by Johann Sebastian Bach. 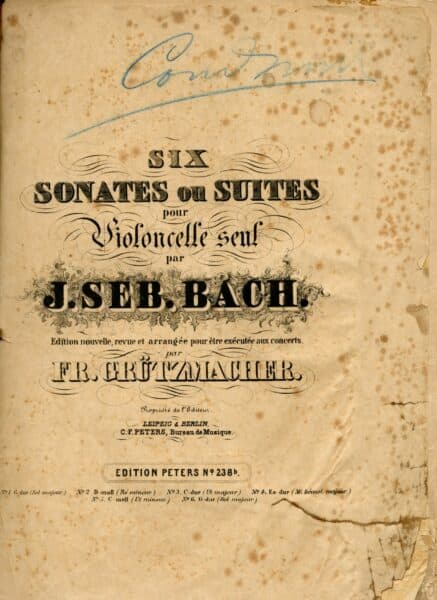 Casals showed the score to his teacher and was told that on rare occasions concert cellists would perform one or the other short dance selection, but no one ever played an entire suite. Apparently, most cellists thought that the music sounded too much like technical exercises and that it was not suitable for the concert stage. Undeterred, Casals worked for 12 years on the Bach suites until he was ready to play them in public. Without a doubt, it was Casals who provided Bach with the distinguished place on the concert stages that the Cello Suites enjoy today. 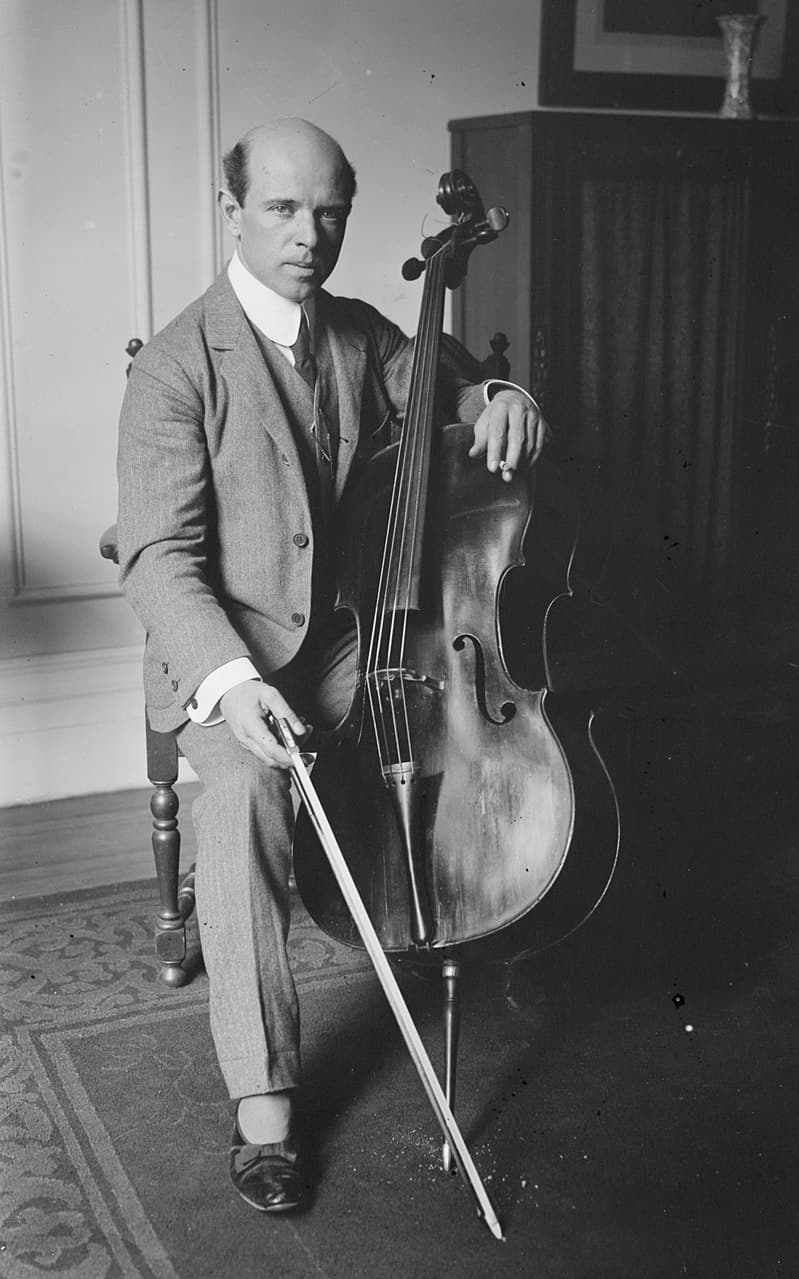 Casals met Camille Saint-Saëns at a party, and he asked Pablo to play his cello concerto. The composer accompanied him at the piano and announced that Pablo’s “interpretation of his work had been the best he had ever heard.” However, when Pablo failed to win a government scholarship, his father told him that “this music nonsense” had to stop. It plunged the young artist into a deep depression, and he unsuccessfully tried to find solace in organized religion and socialist political ideas. For a short period of time, Pablo had thoughts of suicide, but he did not reveal his feeling to his parents. Sensing his profound unhappiness, his mother made the momentous decision that Pablo’s talent would not be wasted, and she took her son to Madrid on short notice.