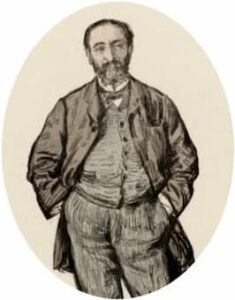 On 19 January 1873, the French cellist, viola da gamba player and instrument maker Auguste Tolbecque premiered Camille Saint-Saëns’ Cello Concerto No. 1 in A minor, Op. 33, a work specifically composed for him. Tolbecque was a close personal friend, and the solo cellist of the Conservatoire orchestra. He was a composer himself, and also a published music historian. Tolbecque was influential in the performance of early music as he conducted research into historical instruments and their restoration. 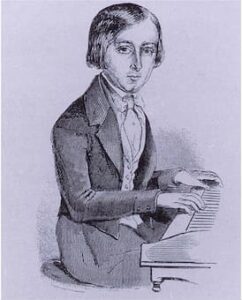 His compositions tend to be light in style and influenced by Mendelssohn and Schumann. Tolbecque retired before he was able to produce a recording, and he does not figure prominently in the review of the Saint-Saëns concerto published in the Revue et gazette musicale de Paris immediately after the premiere. “If Mr. Saint-Saëns should decide to continue in this vein,” the reviewer wrote, “which is consistent with his violin concerto, the Trio in F, and other works of lesser significance, he is certain to recover many of the votes that he lost with his all-too-obvious divergence from classicism and the tendencies in a number of his recent works. We must say that the Cello Concerto seems to us to be a beautiful and good work of excellent sentiment and perfect cohesiveness, and as usual the form is of greatest interest.” 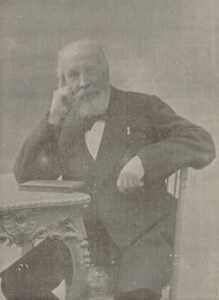 At the time Saint-Saëns composed his first Cello Concerto he had already reached the age of thirty-seven. He was highly regarded in French musical circles, but as a composer he was still searching for his breakthrough work. He clearly possessed a mastery of compositional technique, and his ease, ingenuity, naturalness and productivity was compared to “a tree producing leaves.” Although he was living in a period of extreme musical experimentations, Saint-Saëns remained stubbornly traditional. Romain Rolland wrote in 1908, “He brings into the midst of our modern restlessness something of the sweetness and clarity of past periods, something that seems like fragments of a vanished world.” In his first Cello Concert, Saint-Saëns takes a deliberate stance away from what the critic calls “the (modernist) tendencies in a number of his recent works.” His unmistakable melodic charm and characteristic freshness and vitality are clothed in a formal clarity that undoubtedly accounts for the widespread popularity the 1st Cello Concerto enjoyed from the very onset. 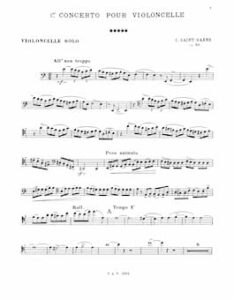 Opening of Saint-Saëns’ Cello Concerto No. 1

For Saint-Saëns, “form was the essence of art.” As he once wrote, “the music-lover is most of all enchanted by expressiveness and passion, but that is not the case for the artist. An artist who does not feel a deep sense of personal satisfaction with elegant lines, harmonious colors or a perfect progression of chords has no comprehension of true art.” As the anonymous critic had written after the premiere, “it should be clarified that this is in reality a “Concertstück,” since the three relatively short movements run together. The orchestra plays such a major role that it gives the work symphonic character, a tendency present in every concerto of any significance since Beethoven.” Saint-Saëns might have been looking at Franz Liszt, a composer he greatly admired, as the three movements of the concerto are interconnected. In fact, the principle theme is sounded in legato running triplets, and it appears in all movements of the concerto. 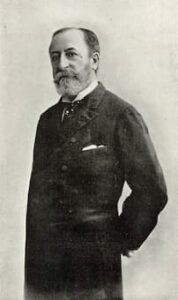 Sir Donald Francis Tovey later wrote “Here, for once, is a violoncello concerto in which the solo instrument displays every register without the slightest difficulty in penetrating the orchestra.” The orchestra clearly plays a role beyond that of mere accompaniment, “as this work never succumbs to the imbalance frequently encountered in cello concertos whereby for long stretches the soloist is seen bowing furiously but is scarcely heard.” As Saint-Saëns tellingly suggested, “Virtuosity gives a composer wings with which to soar above the commonplace and the platitudinous.” Uniting the lyrical quality of the cello with instrumental virtuosity and carful orchestral scoring produced a work valued by performers and loved by audiences. But what is more, a good many composers, including Shostakovich and Rachmaninoff considered Saint-Saëns’ Cello Concerto No. 1 to be the greatest of all cello concertos.