In Tune Arts
The Gift: Bosch and Menotti’s Amahl and the Night Visitors
by Maureen Buja December 22nd, 2021 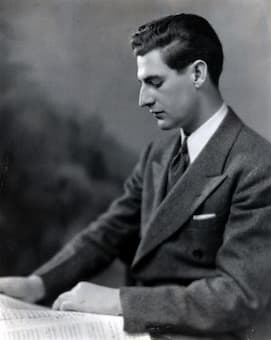 The most famous opera in America had its premiere 70 years ago on Christmas Eve. At its debut, it was estimated that it had audience of 5 million people – a record for any opera. Giancarlo Menotti’s Amahl and the Night Visitors made its appearance as the first opera written for the medium of television on 24 December 1951. Commissioned by Peter Herman Adler, director of opera programming for the National Broadcasting Company (NBC), the opera took an early painting by Hieronymus Bosch as its inspiration.

Hieronymus Bosch (c. 1450-1516) was a Dutch painter who is now best known for his altar triptych The Garden of Earthly Delights. His early work, The Adoration of the Magi, found in the collection of the Metropolitan Museum of Art, is very different than his more familiar glimpses of hell and agony. 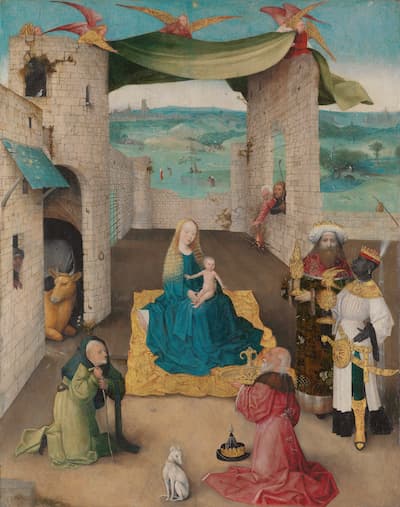 Bosch: The Adoration of the Magi (Metropolitan Museum of Art)

In the painting, which is presented almost like a stage setting, with the angels above physically raising the curtain on the scene, a strong juxtaposition between the rich and the poor is presented. The wealth of the three kings (Melchior, Caspar, and Balthasar) plays against the poverty of the peasants and the shepherds. This vision of centuries past is placed, however, in a contemporary landscape. The focus is on the presentation of the gifts.

Melchior, kneeling in front, offers a golden flagon and tray decorated with pearls and gems.

Caspar, with his turban, holds a magnificent Gothic vessel holding myrrh. Unlike everyone else in the center, he looks out directly at the viewer.

Balthasar, representing Africa, holds a vessel topped with a phoenix, who plucks its breast to feed its young with its own blood.

Of course, all these elements are symbolic: Melchior’s gold symbolizes Christ’s kingly status; Caspar’s myrrh symbolizes Christ’s death, as myrrh is used in burial rites, while Balthasar’s phoenix represents both Christ’s sacrifice and the resurrected Christ.

Once you move away from the central figures, you see all kinds of actions by secondary people: a man peeps out of a window in the left, to the right, through an opening in the wall, other men watch and one warms his hands. In the far background, a man walks with a woman, a shepherd plays a pipe while sitting under a tree, a woman in a red dress appears to be dancing with a man. Behind them, a large party on horseback ride around a hill. There’s a hunting party with dogs. In the far background, we see the towers of a walled city. 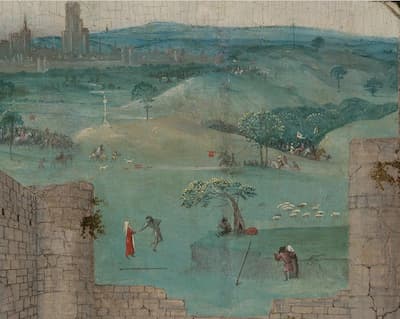 On the right side of the image, a man and a woman walk across a bridge, followed by a dog. The trees are in bloom, crows pick at a skeleton of an animal and a cross is positioned by the river. 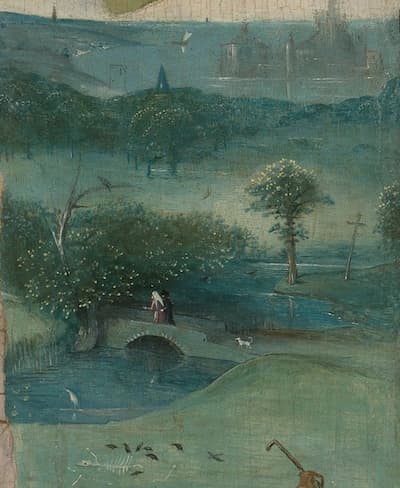 Like the gifts, it’s all symbolic. The fact that the trees are flowering, there’s a cross visible, and flowers bloom beside the cow lets us know that this isn’t December, this isn’t Jerusalem, and Bosch is mixing history with contemporary culture.

So what did Menotti do with this?

He pulls us into the background. In his opera, we never see the Holy Family. Instead we start behind the hills, far away and the only character we know from the painting is the star in the heavens.

The angels and the star (detail)

In the opera, Amahl, a crippled child, is admonished by his mother for telling yet more stories, this time about a star in the sky. The family is in desperate straits: the cupboard is empty, and begging will be their future tomorrow. Next he tells her 3 kings have come. Ha! Another story, but this, like the first one, turns out to be true. They tell her they are following a star. The 3 kings wish to rest and warm themselves, but the fire has gone out and there is nothing to eat. The mother goes out to see what she can get from the neighbors and Amahl quizzes each king. Balthazar admits his royal blood is just like normal blood and Kaspar turns out to keep sweets in his beautiful coffer. As the kings describe the child they are looking for, the mother always recognizes Amahl in their description. The neighbors come with food, and then all go to sleep. The mother thinks of all the gold they are carrying and how much better it would be if it went to her child rather than an unknown child. She is caught as she takes some gold and is fiercely defended by Amahl. Melchior says it’s not important – the other child doesn’t need it because he will build his kingdom on love. Amahl decides to send his greatest gift, his crutch, despite his mother’s protests. At that, he is miraculously cured – not only can he walk but also jump, dance and run! The kings recognize this as a sign from Christ that Amahl’s gift has been recognized. He then asks his mother to give her greatest gift, her beloved son, and to let him accompany the kings on their search. She agrees and the opera closes with Amahl, his crutch tied to his back, leaving with the 3 kings in their ultimately successful search.

Just as Bosch mixed contemporary and historical, Menotti did the same – the mother’s admonishments to her son are just what you would hear in the 20th century – the opera opens with the dialogue from anywhere: “Amahl….Time to go to bed!” “Coming” (and of course he doesn’t come)


The high point of the opera with Amahl’s cure is a wonderful change of mood – even on a dark cold night, all is light. 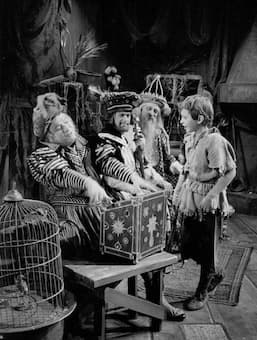 Menotti was insistent that the role of Amahl could only be performed by a boy. He would not give his permission to substitute a woman for the child as happens in so many operas (Cherubino in The Marriage of Figaro, for example). Menotti told the story that for him, as a child growing up in Italy, it was the 3 kings, not Santa Claus, who brought the Christmas gifts. And so, for him, Bosch’s wonderful picture, with the 3 kings at the focal point of the painting, brought back his childhood and brought the 3 kings to America.

The opera was an annual on NBC television from 1951 through 1962 as a live production. In 1963, it was pre-recorded, to the dismay of Menotti, and in 1966, when the rights reverted to him, he refused further broadcasts. A new version with Teresa Statas as the mother was filmed in the London and partly in Israel in 1978 but it has never attained the annual status that the original production did.

Amahl and the Night Visitors 1978 Restored

By taking the Christmas story from another angle, from that of the people affected by the progress of the extraordinary three kings across the countryside, Menotti brings his opera to his audience. He brings emotion to a story that has become too familiar. The miracle of Christmas is brought to the most personal level – what will be your gift to another that changes your life?