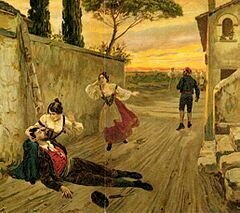 What do you get when you mix religiosity with sexual passion? Audiences got the answer on 17 May 1890 at the Teatro Costanzi in Rome. It was on that date that Pietro Mascagni’s one-act melodrama Cavalleria Rusticana saw its official premier. Based on a play by Giovanni Verga, the religious celebration of Easter provides the backdrop for Turiddu’s declaration of love for Lola, who is married to Alfio. To sooth his pain, Turiddu seduces the young Santuzza. However, when Lola decides to become Turiddu’s mistress, Santuzza not only curses her seducer but also discloses Lola’s infidelity to Alfio. Alfio insults Turiddu and eventually challenges him to a duel. Turiddu entrusts his mother to look after Santuzza, and he is promptly killed in the fight. Although Mascagni had seen the Verga play, he was only inspired to set it to music after the publisher Edoardo Sonzogno announced a competition for a one-act opera.

Competing with more than 70 competitors, Mascagni’s opera was finished in May 1889. He sent a section of the score to Puccini for evaluation, who excitedly passed it on to the publisher Ricordi. In a serious case of missed opportunity, Ricordi rejected the work. In the end, Mascagni was declared the unanimous winner of the competition, and the publishing firm of Sonzogno made a fortune! 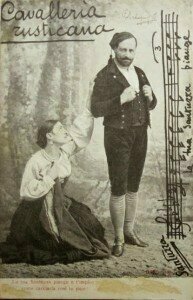 The premier on 17 May was a resounding success, and within a couple of months the opera had conquered all the principal cities of Europe and America. Considered the first verismo opera, Cavalleria Rusticana mirrored the Italian literary movement of the same name, and portrayed the world with great realism. With its operatic introduction to regional milieu—in this case a small town in Sicily—local customs and lower-class idioms, it became the prototype of a new genre. The 1890s witnessed a “brief flowering of operas on veristic subjects, both in Italy and abroad,” and on today’s stage Cavalleria is usually paired with the like-minded Pagliacci by Leoncavallo.