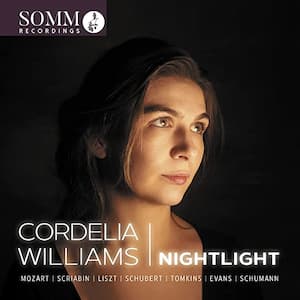 Darkness and light pervade Cordelia Williams’ latest release, Nightlight, which explores the many facets of nighttime – its turmoil, terror and tenderness, and the longing for and consolation of light – through a programme of brooding, atmospheric and ultimately consoling music.

The album was conceived over several years when Cordelia was nursing her newborn sons in those countless broken nights of early motherhood, where one hovers in a strange, shadowy realm between sleep and wakefulness, alert to the slightest murmur from the baby. The recording is dedicated to “those who experience despair or sublime melancholy during the hours before dawn, who are searching for solace, peace or impossible hope. To anyone lost who is waiting to be found by the light.” (Cordelia Williams).

When preparing the music for the album Williams pondered the phrase “dark night of the soul”, now used to describe our most profound trials and challenges, but which actually comes from the late sixteenth-century poem of St John of the Cross. Here “dark night” refers to the process of leaving behind the self on a journey towards an unknowable destination of light. The organisation of the music on this disc follows a similar path, from the melancholy and anxiety of Mozart‘s Fantasia in D minor to the hope and consolation of Schumann‘s Gesänge der Frühe (Songs of Dawn). The result is an intense chiaroscuro journey through music that is both disturbing and consolatory. 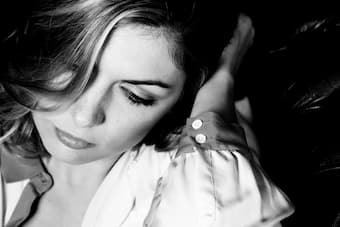 The disc opens with Mozart’s unsettling, almost hallucinatory Fantasia K.397, here played with a brooding intimacy, perfectly paced and poised. The piece neatly introduces the themes of this album with its switch to the joyous brightness of D major before reprising the darkly-hued introductory measures, and ending on a single open D. The pedalling here is exquisitely managed, creating a romantic, ambiguous wash of harmony.

Scriabin‘s Piano Sonata No. 2 portrays the sea at nighttime, from “the quiet of a southern night on the seashore” (Scriabin) to the agitation of the deep ocean, briefly relieved by gentle moonlight on the water. This is most powerfully portrayed in the molto perpetuo finale whose turbulence is tempered by episodes of lyricism, warm and light as themes and textures spill and wash over one another.

Two tender Consolations by Liszt, both in warm E major, provide an interlude of quiet contemplation before we are plunged into the disturbed, dislocated world of Schubert‘s Sonata in C minor, D958. This is the biggest work on the album and like the Mozart Fantasia, it presents all the themes of the disc in an exceptionally fine performance which is sensitive to Schubert’s quixotic shifts of mood and harmony. The Adagio has a special stillness in its opening before descending into a darker, more psychotic realm. There is little consolation in this sonata and the finale, a swirling fevered Allegro dance.


Out of the darkest recesses of Schubert comes Thomas Tomkins’s A Sad Pavan for these Distracted Times, a work which seems to encapsulate our strange Corona days in its sense of isolation and regret. It is elegantly presented by Williams who appreciates both its composure and stark poignancy. The music wears its age lightly (it was composed in 1649 after the execution of King Charles I): played on the piano, it has an appealing contemporary crispness.

The unadorned melancholy of the Pavan contrasts beautifully with the Chopinesque filigrees and hypnotic ostinato of Bill Evans’ Peace Piece, a work which bears more than a passing resemblance to Chopin‘s Berceuse in its structure and idioms, and which is increasingly finding its way onto classical albums. Williams’ performance is tender, warm and leisurely, a welcome lullaby during the long, dark night.


The final work on the disc is Schumann’s Gesänge der Frühe (Songs of Dawn). Composed three years before he died, it shares some characteristics with the late piano music of Brahms in its introspection and intimacy, but ultimately this is where darkness is replaced by shimmering light as the terrors of the night are forgotten in the dawning of a new day. The hymn-like Im ruhingen Tempo gives way to more lovely, quirky movements and a sense of lightness and joy but tempered by the more unsettled Bewegt. The final movement is gentle and contemplative, tinged with valediction, but ultimately uplifting. Here at last light and hope shine through.

Thoughtfully conceived and exquisitely performed, Nightlight is also notably for the fine sound quality of the recording – a perfect mix of warmth, intimacy and depth.