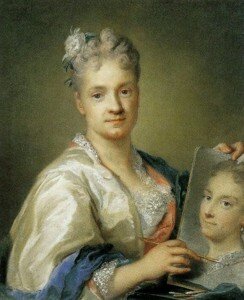 The painter Rosalba Carriera (ca. 1673-1757) was born in Venice and made her name in portrait miniatures. Her work in pastels made her popular and she chose to show this in her own self-portrait where her self-portait was in pastels while she holds one of her own oil paintings of her sister.

Her ability in miniatures and the fashion for snuff, and therefore snuff boxes, made her name first among the visitors to Venice – have your portrait painted on ivory for your own snuff box. This image of Sir Edmund Waterson is only 78 mm (3 inches) tall. 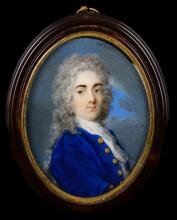 It became a popular medium, and the style of miniature painting on ivory became popular all over Europe.

The mezzo-soprano Faustina Bordoni was also born in Venice and with the composer-brothers Alessandro and Benedetto Marcello as her sponsors, quickly rose in operatic circles. She became so popular that she was known simply by her first name. She made her debut in Venice then started to work internationally, first in Germany and then in Vienna. 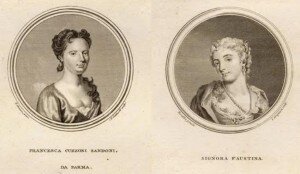 The Rivals: Cuzzoni and Faustina

It was in London, however, that she really made her name. She sang in many Handel operas, creating roles in at least 4 operas. It was in a performance of Giovanni Bononcini’s Astianatte in 1727 that her audience rioted, arguing over her voice and that of her rival, the Parma soprano Francesca Cuzzoni, who was also in London and also singing in Handel operas. It turns out that the Italian insults and hair-pulling attributed to the two singers was actually more due to the actions of their followers than the singers themselves. The two women had appeared on the same stage in Italy more than a decade earlier and were quietly reputed to be good friends, despite the furor. 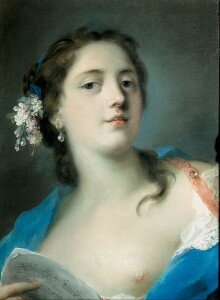 One of the recurring styles of Carriera’s portraits was that they were generally bust length, the body slightly turned, and the head turned towards the viewer. She was noted for ability to capture texture: the texture of fabrics, furs, jewels, hair, and skin.

Her first portrait of Faustina Bordoni is a pastel, done between 1724 and 1725. Note the lace scarf, and the texture that Carriera has conveyed with just a hint of the decoration. In 1724 and 1725, she was appearing in Parma in operas including Vinci’s Il trionfo di Camilla. 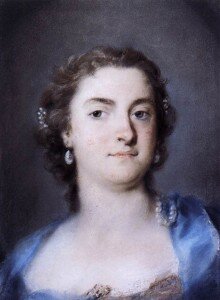 Her 1730s pastel of Faustina Bordoni Hasse captured the face of an energetic, shrewd, and slightly older singer, although dressed in a similar blue with a lace decoration. Her last name here, Hasse, is that of her composer husband, Johann Adolph Hasse. They were married in 1730 and Hasse was composer in residence at the court of Augustus the Strong in Dresden, where they remained for more than 30 years. She sang in some 15 of his operas, including Cleofide, and was given the title of virtuosa da camera. In 1763, the Hasses moved to Vienna and in 1773 to Venice, with their two singer daughters.

Ranked among the greatest singers of her time, she was praised by Quantz for her brilliant execution, her singing technique, and her abilities. He closed his praise with: ‘she was born for singing and for acting.’