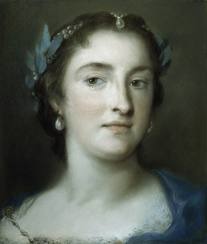 After merely two years in London, Faustina Bordoni departed for Venice. Exhausted from her petty quarrels with Francesca Cuzzoni, and tired of a feuding and bickering general public and musical establishment — which of course included Handel’s futile attempts at micromanagement — Faustina was ever so happy to say goodbye to the British Isles. Yet her short engagement had been a brilliant artistic success, and many a music lover was saddened by her departure as representatively echoed in an anonymous epitaph: “But whatever good fortune she meets with, she merits it all by her courteous and polite manners, as well as her talents”. Not surprisingly, Faustina also left a trail of broken hearts. Countless young and wealthy gentlemen fought duels over the mere right to escort her to her carriage. While some gentlemen happily experienced violent deaths in pursuit of goddess Faustina, others delighted in short-lived and highly publicized amorous episodes, with the comings and goings duly reported in the gossip columns of London newspapers. Faustina in turn, treated her London love affairs with a certain degree of detachment and indifference, as she never got sufficiently distracted to forget about her career. The historiography of music, of course, would like us to believe that Faustina was really an innocent and chase virgin — it’s the old trope of classifying women as either as saints or whores — with her musical art sublimating for carnal pleasures.

Once Faustina arrived in Venice in 1728, however, things took a rather unexpected turn as she fell head over heels in love with the German composer Johann Adolph Hasse (1699-1783). Hasse, originally from Hamburg, had spent a good deal of time in Venice, Bologna, Florence, and Rome, before eventually settling in Naples to study with Nicola Porpora and Alessandro Scarlatti. Over time, his musical style became so thoroughly Italian that he was affectionately nicknamed “il caro Sassone” (the dear Saxon). His contemporaries soon acknowledged him as the most popular dramatic composer of his age, and Charles Burney paid special tribute to the composer in 1775. “Hasse is the most natural, elegant, and judicious composer of vocal music now alive; equally a friend to poetry and the voice, he discovers as much judgment as genius, in expressing words, as well as in accompanying those sweet and tender melodies, which he gives to the singer. Always regarding the voice, as the first object of attention in a theater, he never suffocates it by the learned jargon of a multiplicity of instruments and subjects; but is as careful of preserving its importance as a painter, of throwing the strongest light upon the capital figure of his piece”. In collaboration with the Italian dramatist Pietro Metastasio — who would subsequently also supply versified texts to Wolfgang Amadeus Mozart — Hasse finished his opera Artasere in 1730. Staged in Venice, the opera became an immediate and rousing success. Faustina and Hasse had been furtively dating since 1728, but now at the top of their respective professions, decided to wed in a secret ceremony around 25 June 1730.

In 1731, the electoral court in Dresden engaged the celebrity couple. Hasse was appointed maestro di cappella and in charge of music and opera at the court, and Faustina charged with performing the compositions of her husband. Receiving a combined salary of 6000 Thalers — the average annual income of a medical professional in Saxony at that time was a mere 200 Thalers — the couple would remain in Dresden for over 30 years. Hasse’s first production for Dresden was the opera Cleofide, based on a libretto adapted from Metastasio. Exquisitely crafted and custom designed for Faustina’s voice and acting style, Cleofide was the musical and social high point of the Dresden opera season. Even J.S. Bach and his eldest son traveled from Leipzig to hear the premiere. Over the years, Hasse composed roughly 100 Operas, and Faustina continued to awe audiences in Dresden and elsewhere. Although both Hasse and Faustina engaged in extramarital affairs — most notably is Faustina’s conquest of the elector Augustus II of Dresden — their marriage was nevertheless a happy one and produced three children. Even the great Metastasio pronounced them “truly an exquisite couple”. Faustina retired from the stage in 1753, and when Prussian forces bombarded the city of Dresden in 1760, the opera house was destroyed along with all of Hasse’s musical manuscripts. The couple quickly moved to Vienna, where they remained until 1775 before retiring in the city of Venice. Faustina died in 1781 aged eighty-four, and Hasse not long thereafter, also at the ripe old age of eighty-four.