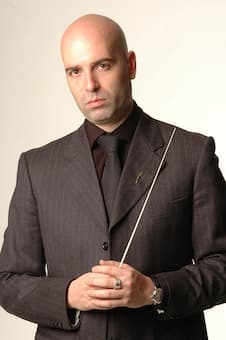 One of the problems in trying to portray a painting in music is how literal one chooses to be. Some of the most successful of the musician / artist combinations we’ve looked at in this series have dealt with modern and abstract art, rather than figurative and landscape. In this examination of three pieces by Israeli composer Gil Shohat (b. 1973), we can see what elements of the images he chooses to illustrate musically and how he portrays three iconic images of Edvard Munch, Gustav Klimt, and Vincent van Gogh. 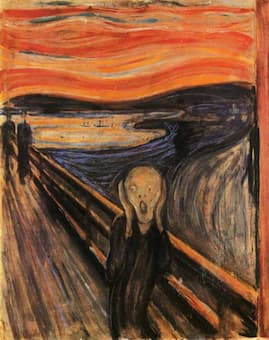 In his 1989 piano work 3 Improvisations on Paintings, Shohat’s first subject is Edvard Munch’s painting The Scream, here called The Cry. Painted in 1893, Der Schrei der Natur (The Scream of Nature), Munch’s original title in German, or Skrik (Shiek), its original title in Norwegian, is considered ‘a Mona Lisa of our time.’ It’s an age of anxiety and uncertainty and Munch depicted this in his work. As Munch was out walking at sunset with two friends, he stopped to look at the view and suddenly the setting sun turned the clouds blood red. He felt an ‘infinite scream passing through nature’ and captured the colours and the feeling in one unforgettable work. His two friends are depicted on the left of the painting, while he pauses and experiences his epiphany of sight and sound, holding his head as it all become too much.

In his piano work, Shoat depicts not the foreground, but the background, the heavy colours hanging over the figures out for their walk. 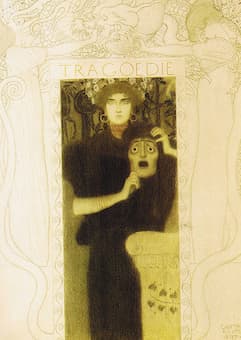 Gustav Klimt created his painting Tragedy in 1897 as an illustration for publisher Martin Gerlach’s Allegories and Emblems, a three-volume set intended to rekindle the myth and symbolism of Renaissance and Baroque Art. The 19-year-old Klimt, fresh out of art school, created 11 allegorical images for Gerlach.

Austere and still, Tragedy’s pale face emerges from the background, and against her dark cloak, holds a classical Greek theatre mask for tragedy. Around her arm is a serpent bracelet that links to the frame of the picture, which depicts a classical Asian dragon who has seized one woman in his claws and the other with his long tail.

Shohat’s composition is based around 12-tone row and seems build around two ideas: the constantly repeating figures and other movements that seem to fly away off the top of the piano. Other ideas rumble up from the bottom of the keyboard. The piece ends inconclusively, as the 12-tone row has no place to go, as much as tragedies swirl around us, sometimes never resolving either. 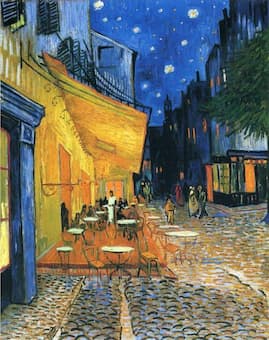 Painted in 1888 in Arles, Vincent van Gogh’s Café Terrace at Night, shows us a place of comfort. Although depicting a night scene, this is a painting that uses dark blue in place of black. The dark sky above and the cobbles of the street are eclipsed by the bright and welcoming colour of the café, with its partially filled tables, and the empty tables waiting just for you. It was one of the few paintings done by van Gogh on location, on The Place du Forum, Arles, and the first to depict the starry sky that were others of his Arles night paintings. He found the artificial gas lighting, filled with oranges and yellows, to be the perfect complement to the dark night.

In his work, Shohat seems to conjure up an invisible pianist, playing from inside the brightly lit café. The patron scattered at the tables go about their business, discussing the news of the day, while the piano fills in the spaces between their conversations.


By choosing to depict the backgrounds and backstories of these famous paintings, Shohat draws us deeper into the images and their meaning. The invisible pianist of the café is the crowning touch to the cycle.