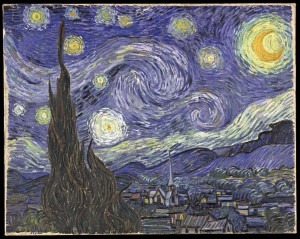 The sharp color contrasts of the post-impressionist painter Vincent van Gogh (1853-1890) have become familiar images for us, be it his café scene or his cornfields or even his room. It is his view of the heavens from his room in Saint-Rémy-de-Provence, La Nuit étoilée (The Starry Night). Although the title says night, the image is actually of the sky just before sunrise. The village at the bottom of the picture is an idealized addition.

The picture was painted in June 1889, in the months following his breakdown in December 1888. He admitted himself to the Saint-Paul-de-Mausole lunatic asylum in May 1889 where he stayed for a year. In these last two years before his death, van Gogh produced the majority of his works and most of his masterpieces. The view given in The Starry Night was painted by van Gogh more than 20 times during the daytime, nighttime, and during all kinds of weather conditions from bright sunny days to overcast and rainy days.

During this period, van Gogh was debating with other painters about the importance of painting from nature, versus painting from the imagination. His series of night paintings, including The Starry Night, were hampered by the difficulties of actually painting at night and the difficulties in seeing the palate and the colors. Van Gogh viewed The Starry Night as a failure, because of the level of abstraction in the painting and modern critics of the painting take into consideration van Gogh’s mental illness, a form of mental epilepsy, as contributing to the hallucinatory qualities of the work.

The French composer Henri Dutilleux (1916-2013) used this painting as the inspiration for his 1978 orchestral work Timbres, espace, mouvement ou la nuit étoilée. Dutilleux tried to capture the “almost cosmic whirling effect” of the painting. The work is for cellos, double basses, wind instruments and percussion. The lack of violins and violas was Dutilleux’ way of capturing the immobility of the imagined city below the flowing sky. The cellos are moved from their usual place on the right side of the conductor and are placed in a half-circle around the conductor.

Commissioned by cellist Mstislav Rostropovich for the National Symphony Orchestra of Washington, DC, the work received its première in 1978. Dutilleux composed the piece after viewing the original of the work at the Museum of Modern Art in New York and used it to fulfill a long-standing desire “to translate into music the feeling of exultation, or perhaps delirium…”

Dutilleux: Timbres, espace, mouvement avec interlude: I. quarter note = circa 72 (BBC Philharmonic Orchestra; Yan Pascal Tortelier, cond.)
Important in the beginning of the work is the haunting solo of the viola d’amore.

In a 1991 revision, Dutilleux added a linking passage to the work in a section for 12 cellos. Remember from the description above that these are gathered in a semi-circle around the conductor, and so would make a unique impression when this Interlude is performed.