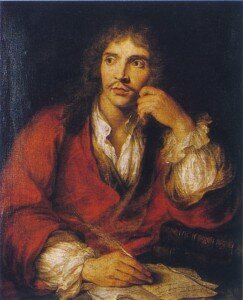 Jean-Baptiste Poquelin, better known under his stage name “Molière,” is widely regarded as one of the greatest writers in the French language. He spent 13 years as an itinerant actor before he started to write his own plays. Combining elements of the Commedia dell’arte with the more refined aspects of French comedy, Molière produced his plays with a company of actors known as “Troupe du Roi” (The King’s Troupe).

At some stage he added a husband and wife pairing from the province to his team. Jean Pitel, also known as Beauval, had gradually risen to the status of actor, and his wife, Jeanne de Beauval, specialized in the roles of queens in tragedy and soubrettes in comedy. Known around town as “Jeanneton,” she became famous for playing “Madelon” in Molière’s Les précieuses ridicules. Given the sensuous and voluptuous musical lines in Couperin’s portrait, “Jeanneton” must have made quite an impression on stage! 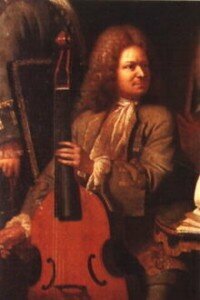 Couperin did not merely have an eye for theatrical beauty; he also had a keen ear for his musical colleagues. And one of his most famous contemporaries was the composer and viola da gamba virtuoso Antoine Forqueray (1671-1745). He performed for Louis XIV at the age of ten, and was subsequently appointed “musicien ordinaire” of “La chambre du Roy.” To supplement his income, he gave private lessons to members of the royal family and the aristocracy, and daily concerts at the court of Versailles prominently featured Forqueray. He became widely known for his dramatic and brash performance style, and he was said to “play like the devil.” As such, it is no accident that three contemporaries, Jean-Philippe Rameau, Jacques Duphly and François Couperin composed musical tributes to him. In Couperin’s musical snapshot, Forqueray is portrayed as self-assured and brilliant in a proud “Allemande” movement. 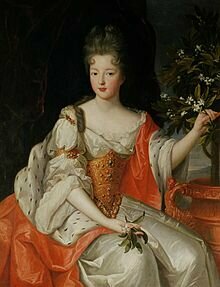 Louise Françoise de Bourbon was the eldest surviving legitimized daughter of Louis XIV of France and his “maîtresse-en-titre,” Madame de Montespan. Endowed with a deep passion for music and dance, she also possessed a wicked sense of humor and mischief.
“Her face was formed by the most tender loves and her nature made to dally with them. She possessed the art of placing everyone at their ease; there was nothing about her, which did not tend naturally to please, with a grace unparalleled, even in her slightest actions… She was the prettiest, wittiest, and naughtiest of the fast set in the latter half of the reign, and was in constant hot water.” At the age of 11, she was married to a distant cousin. Because of, or despite of it, she had a turbulent love life, and was frequently mentioned in various scandals. She smoked a pipe and could drink most men under the table! Without doubt, enough biographical information for Couperin to immortalize her in his gavotte “La Bourbonnoise.”

Music has the ability to praise, pay tribute and to regale in the sensuous pleasure of life. However, it is also capable of sounding sarcasm, irony and satire. And that is certainly the case in Couperin’s “Les fastes de la grande et anciénne Mxnxstrxndxsx.” Before you demand that I check my spelling, let me assure you that the nonsensical collection of letters in the title are actually deliberate. It refers to the company of “Ménétriers,” essentially a Minstrels union, which was established in 1321 and abolished in 1776. The “King of the Minstrels,” as it were, presides over a whole range of street musicians—with or without acrobatic sidekicks—who are strongly urged to pay a subscription fee. According to the bylaws of the corporation, “no person from the kingdom of France or foreigner can teach music, dance, meet by day or night to give serenades or play an instrument in weddings, public assemblies or elsewhere… if not recognized and approved by the king and his lieutenants.” At some point the organization even tried to subsume the king’s organist, including Couperin, under its jurisdiction. Couperin was clearly not amused, as is amply evident in his music.