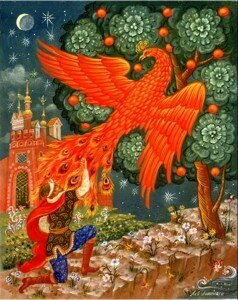 The Firebird by Lev Lominago

Animals in music occur in everything from children’s pieces to great serious works. Their rhythm in the world is something that a composer can take up and develop and also their aspect: fierce or calming.

In his ballet The Firebird, Stravinsky gave us the magnificent mythical bird of The Firebird and its blessing and its curse. At its premiere in 1910, it was an instant success.

Stravinsky: The Firebird: Scene 1: The Firebird’s Dance
Two very different cat pieces give us the sleepy cats of the evening and the active cats for a solstice procession. 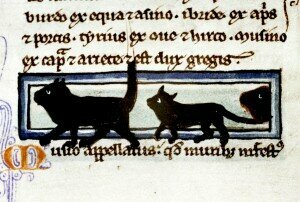 Dohnányi: 3 Singular Pieces, op. 44: II. Nocturne – Cats on the Roof
Martinů: Pruvod kocek v noci slunovratu (Procession of the Cats on Solstice Night), H. 122
In his collection of 25 Norwegian Folksongs and Dances, Op. 17, Edvard Grieg took up some animal pieces, some of which are unusual choices, such as The Pig (No. 8). It seems, however, to be a quite contented animal. 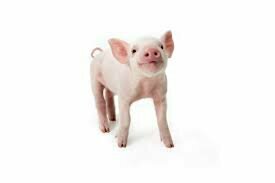 Grieg: 25 Norwegian Folk Songs and Dances, Op. 17: No. 8. The Pig
In Harald Saeverud’s piano work, The Hare and the Fox, we’re not sure of the outcome – the work is dashing, almost out of breath, but who’s the winner?

Saeverun: Haren og reven (The Hare and the Fox) 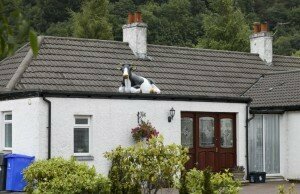 Not this cow on a roof

With Darius Milhaud’s glorious ballet, Le Boeuf sur le Toit, however, we are very sure that, with the cow on the roof, that this Brazilian extravaganza is just the cover for a wonderful party downstairs.

Milhaud: Le Boeuf sur le toit
Leroy Anderson have us a number of animal songs, from the Waltzing Cat, with that troublesome dog, to the horses that neigh so convincingly at the end of Sleigh Ride. It is his Horse and Buggy, however, that conjures up the travel of the last century. 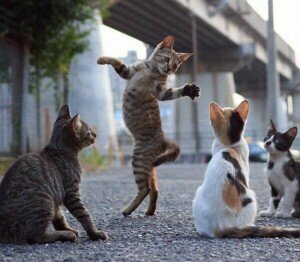 The Waltzing Cat
Horse and Buggy
Clearly we’ve left out Saint-Saëns’ Carnival of the Animals, the animals in Peter and the Wolf, but there are so many more to discover. What’s your favourite animal in music?