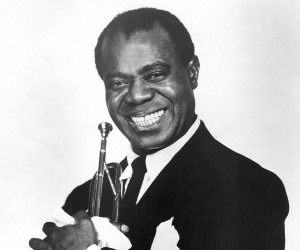 There is much to admire. As a classical musician I envy their ability to improvise spontaneously, unfettered, inspired by the ethos of the moment. Jazz artists are not afraid to experiment, which has resulted in exceptionally individual and identifiable styles, even new genres, on a variety of instruments—trumpet, piano, saxophone, clarinet, vibraphone, trombone, singing and entire bands. These artists are distinctive and beyond categorizing!
Although several jazz musicians are identified with distinct songs, which they made famous, others are instantly recognized by their inimitable style. If you’re like me, you are drawn to certain type of music without necessarily recognizing the particular form of the music. You’ll be surprised perhaps to learn how many jazz styles there are.
Jazz became a musical art form around the beginning of the 20th century— a blend of African and European musical traditions, but it incorporated singular rhythmic styles including syncopation, and polyrhythms.
Trumpeter, bandleader and singer Louis Armstrong, ‘Sachmo’, the “Ambassador of Jazz,” became the first internationally known pioneer. Born in New Orleans, in 1901, he rose to prominence in the 1920s. He was a proponent of Dixieland jazz style music or “Hot Jazz,” a blend of blues, ragtime and fiery improvisation. Although Louis Armstrong’s Hot Five and Hot Seven bands never performed live, they made several recordings, which are considered classics. The hot sound was based around improvised melodies, which through wild crescendos in the rhythm section—drums, bass, banjo or guitar—culminated in blistering climaxes. It was musically virtuosic with audacious rhythms, swinging phrasing and astonishing high notes. These recordings, popularized wordless or nonsense syllables of “scat singing.” Armstrong was the first African American to be featured on national radio, in 1937, and he appeared in 35 films. His hit tunes Porgy and Bess, What a Wonderful World, and Hello Dolly are classics.
Louis Armstrong: Hot Seven 1927 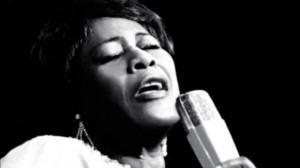 Ella Fitzgerald, the First Lady of Song, also from that era, is known for her smoky, smooth, smouldering singing. Her versatility and exceptional vocal range was such that she could scat, imitate any instrument of an orchestra, and sing everything from sultry ballads to throaty swing numbers. Winning 13 Grammy Awards she was an adored jazz singer for five decades and became an international star. Armstrong and Fitzgerald frequently collaborated. She also appeared on television shows, toured the world, and recorded with other jazz greats. Her voice sends shivers with her often bluesy, luxurious singing.
Ella Fitzgerald: Gershwin: oh Kay!: Someone to Watch Over Me
In the 1930s Big Bands turned up the heat and became immensely popular dance music. ‘Swing’ was infectious, propulsive, and unpredictable, characterized by powerful rhythm sections, and syncopated brass and woodwind instrumental playing. Swing dancing, the jitterbug and the foxtrot became the rage. 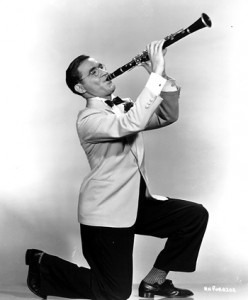 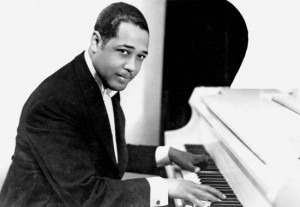 Other legendary artists of big-band swing music include Count Basie, and Duke Ellington. Ellington, whose career spanned over half a century, was celebrated for fusing singular blues melodies and gorgeous textures as well as his regal bearing. His inventive orchestrations enhanced the depth and drama of the music by incorporating unique techniques such as, the plunger mute played by the trumpet, to produce the “do-wa do-wa” sound, and snarling sonorities from the trombone. Ellington’s band toured extensively and his many performances in Carnegie Hall drew comparisons to composers Prokofiev and Stravinsky. Ellington wrote more than one thousand compositions. His signature piece, It Don’t Mean a Thing (if It Ain’t Got That Swing) is only one of a gigantic body of work.
On the piano, Oscar Peterson was recognized as a whiz who could swing at breakneck
tempos with impressive nimbleness and dexterity.
Duke Ellington: It Don’t Mean a Thing (If it Ain’t Got That Swing)

In the late 1940s, cool jazz emerged with more relaxed tempos, and a nimbler, lighter feel. Dave Brubeck was one of its foremost exponents. His timeless hits Take Five and Time Out, the first jazz album to sell one million copies, explore unusual time signatures (5/4, 9/8, 6/4, 3/4) and his improvised counterpoint, polyrhythm, and polytonality pushed the envelope, yet his music was always accessible. His group played in every major city and toured in shows that also featured artists Duke Ellington, Ella Fitzgerald, Charlie Parker, Dizzy Gillespie and Stan Getz.
Brubeck had a strong social conscience and when his quartet broke up in 1967, he began composing classical music— “Elementals” a concerto grosso, an oratorio, four cantatas, a mass, and two ballets. His later works for jazz combo with orchestra focused on societal issues both political and religious. His cantata entitled “The Gates of Justice,” based on the words of Martin Luther King, Jr. and the Old Testament, was premiered by Erich Kunzel and the Cincinnati Symphony, and his 1972 cantata “Truth Is Fallen” scored for orchestra, guitars and police sirens, addressed the tragic shooting that occurred at Kent State University in 1970. A truly remarkable and versatile artist, his music intertwined jazz and classical traditions.
Dave Brubeck: Take Five 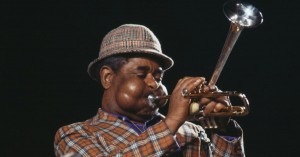 Jazz also shifted in another direction and away from dance music during the mid-1940s. Trumpeter “Dizzy” Gillespie, along with alto saxophonist Charlie Parker, ushered in the era of Be-Bop. Bebop or Bop focused on the individual musician’s craft in smaller combos of 4-6 musicians. Rather than improvising around a melodic line, bebop musicians stretched harmonies and structures. In other words, the ad-libbing was vertical with wild, fast and complex chord progressions and sudden key changes. Gillespie, who you may have seen performing with bulging cheeks and a strangely angled trumpet bell, was a remarkable virtuoso, who dazzled with extraordinarily complex harmonies and rhythms unheard of at the time. With Charlie Parker, known also as Yardbird or Bird due to his “free as a bird” style of playing, Gillespie explored this distinct, multifaceted form of jazz. They played scorching and unpredictable solos with singular dynamics, expression and virtuosity.
Gillespie and Parker “Be-Bop”
Gillespie was also one of the first to infuse the styles of other cultures namely Afro-Cuban and Afro-Latin music into his jazz. Influenced by Cuban and Puerto Rican musicians such as Xavier Cugat, Tito Puente, and Arturo Sandoval he started Afro-Cuban bands. In the 1960s Bossa Nova or Brazilian jazz became popular with its seductive samba rhythms, and simple melodies. Saxophonist Stan Getz, best known for his enduring The Girl from Ipanema sung in both Portuguese and English, is still popular with many diverse artists.
“The Girl from Ipanema” Astrud Gilberto vocals, João Gilberto guitar, and Stan Getz tenor Sax 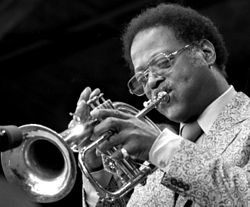 Perhaps not as well known is Clark Terry, whose career spanned over seventy years—one of those indescribable legends who excelled wherever he put his prodigious talents—as a virtuoso trumpet and flugelhorn player, a dedicated educator and composer, and as an instrument designer. It is almost impossible to imagine that he made over nine hundred recordings, more than any other musician in jazz history, and composed two hundred original jazz pieces. His influence as a performer and teacher is unparalleled.
In 1951 Clark was invited to join Duke Ellington’s legendary orchestra. He was the featured soloist with the band for eight years and was one of the few musicians to have worked with the orchestras of both Duke Ellington and Count Basie. Clark became internationally known when in 1960 he became one of the first black musicians to perform as a member of the band featured on the NBC nightly television program the Tonight Show, on staff at the National Broadcasting Company where he performed for twelve years. Clark loved to experiment and when he tried scat singing, which included nonsense sounds and syllables, his fooling around resulted in the smash hit “Mumbles.”
Clark had it all—an inventive, unique style, flawless playing and a jovial, personality. But what set him apart was his dedication to jazz education at the college level. He inspired young players until he passed at age 94.
These artists influenced countless jazz performers who followed in their footsteps, as well as classical composers such as Gershwin, (Rhapsody in Blue, An American in Paris, Porgy and Bess), Shostakovich, (who wrote two jazz suites), Ravel, Stravinsky, Debussy, Milhaud, Aaron Copland and many others.
Clark Terry, trumpet – Bob Brookmeyer, trombone – Straight No Chaser