Composers Anecdotes
And the Winner is…….
Chamber and Solo Music Competition at the 1948 Olympics
by Georg Predota March 26th, 2017 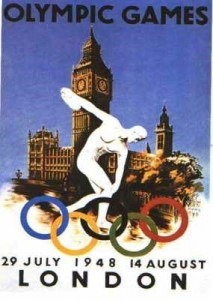 The year was 1948, and athletes from around the world gathered in London to participate in the 14th Olympic Games in the modern era. Because of World War II, it had been 12 years since the last Olympic competition, and given the economic climate and post-war rationing, the 1948 London event became known as the “Austerity Games.” Nevertheless, 4,104 athletes in 19 sport disciplines represented a record 59 nations, even though Germany and Japan were refused permission to participate and the USSR decided not to send any athletes. And while sporting venues around town were busy with everything ranging from track and field to basketball, the Art Competitions at the 1948 Summer Olympics were heating up as well! Adolf Hoch of Austria won gold in architectural designs with his model of “Ski jumping hill on the Kobenzl,” while Gustaf Nordahl of Sweden took top honors with his sculpture “Homage to Ling.” Albert Decaris of France received a gold medal for this etching “Swimming Pool,” and the British painter Alfred Reginald Thomson delighted the home crowd with his gold medal entry, the oil painting “London Amateur Championships.” The gold medal in poetry went to Aale Maria Tynni of Finnland, while Gianni Stuparich of Italy took top honors with his epic work “The Cave.” But wait, the chamber and solo music category pitted the Canadian John Jacob Weinzweig against Sergio Lauricella from Italy. 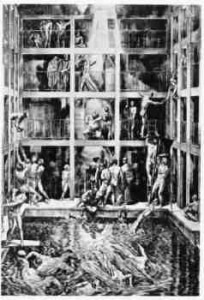 Weinzweig, a native of Toronto, submitted the Divertimento No. 1 for flute and string orchestra. He composed the work in 1945 while in the service of the Royal Canadian Air Force. Combining his interest in 12-tone technique within a three-movement structure, Weinzweig created a work with an emphasis on the entertaining qualities of the original Classical musical genre. His opponent in the other corner was the Neapolitan composer Sergio Lauricella. Not much is known about his biography or professional life, but we do know that he submitted a Toccata for piano. In the end, the judges essentially decided on a draw, and declined to award a gold medal. As such, Weinzweig won Silver and Lauricella Bronze. And just in case you were wondering, the Polish composer Zbigniew Turski took gold for his Olympic Symphony.

John Weinzweig: Divertimento No. 1 for Flute and String Orchestra