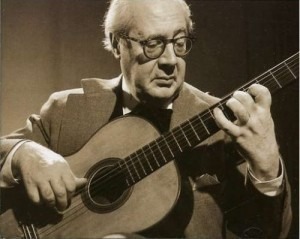 One of the greatest guitarists of all time, considered the grandfather of the classical guitar, Andrés Segovia (1893-1987) hails from Spain, from a humble family that opposed his interest in a career in music, especially the guitar. Without Segovia the classical guitar would not be the admired instrument it is today.

When he gave his first performance at age sixteen and his professional debut four years later in Madrid, critics thought he’d be laughed off the stage for trying to perform classical music. The guitar was not for “serious” musicians. Wasn’t it merely an instrument to accompany singers and dancers? Segovia proved them wrong. He developed a unique technique. He extended the flexibility and expressive potential of the instrument mainly with his use of the right hand, not only strumming and picking, but also using different parts of his fingers or nails to vary the attacks. Through these techniques he was able to modify the dynamic range and expand lyrical and harmonic possibilities.

Segovia plays Frescobaldi
Aria detta la Frescobalda (arr. for guitar)
Segovia played his own transcriptions of Bach—even the exceedingly difficult Chaconne from the second Partita for Violin solo, and music of other classical composers.

Albert Roussel composed a virtuoso piece “Segovia” for the occasion of Segovia’s Paris debut in 1924. Packed with interested patrons and illustrious composers, no less than Paul Dukas, Manuel de Falla, and Joaquín Nin, it was perhaps one of the most memorable recitals in recent history.

Segovia followed this resounding triumph with his first American tour in 1928 arranged by violinist Fritz Kreisler (who loved to play the guitar). Segovia’s debut in New York that year was a tremendous success. His performances all over the world cemented the popularity of the guitar once audiences heard his extraordinary technique and brilliant musicianship.

Segovia had a lifelong relationship with composer Heitor Villa-Lobos who wrote several pieces for him, transcribed several works for him and dedicated his Twelve Etudes to him. Manuel de Falla, Castelnuovo-Tedesco and Rodrigo and others also wrote guitar masterpieces for Segovia enriching the scant solo repertoire.

Segovia taught extensively, thousands of students, the most prominent include Sharon Isbin, Christopher Parkening, Julian Bream and John Williams who influenced generations of guitar players. Segovia left an incalculable body of work, including his own transcriptions, and marked and fingered editions. Two films of his life are available: Andrés Segovia — in Portrait and his Reveries, which was recorded in Madrid in 1977. 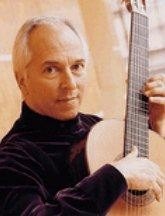 John Williams was born in1941 in Australia and now resides in the UK. Many consider him to be one of the most technically accomplished guitar players. His family moved to London in 1952, where his father, also a guitarist, founded The Spanish Guitar Centre but he was anxious to have his talented son John study with the great master. Andres Segovia was impressed with the 11-year-old prodigy and accepted him. Until 1959 John studied with Segovia at the Accademia Musicale Chigiana in Siena, Italy. He also attended the Royal College of Music in London. Williams made his professional debut in 1958 just before his 18th birthday, at London’s Wigmore Hall. No less than Andres Segovia said of the occasion, “A prince of the guitar has arrived in the musical world.”

Nonetheless in Williams’ 2012 biography, Strings Attached: The Life and Music of John Williams by William Starling, Williams contends that Segovia was opinionated, unsympathetic and unhelpful. Williams claims that Segovia insisted that his students play like him, use his fingerings. I would imagine that any teacher might do that with an adolescent student.

Williams began recording and making successful debuts in all the international capitals of the world, including the Soviet Union in the 1960’s. He collaborated with great artists including Daniel Barenboim and Itzhak Perlman, and appeared on Jacqueline du Pré’s first recordings in 1963 in a work by de Falla.

Williams also played in the group Sky and the broad palette of music that drew him included South American, African, fusion, folk, pop and jazz guitar. He brought international attention to the instrument. He also performed the theme song to the Oscar-winning film The Deer Hunter and a guitar solo version of the Cavatina became a worldwide hit.

Dedicated to the music of his time, he commissioned many works including of Previn, and he performed the premier of Michael Tippett’s King Priam. When Pierre Boulez planned to record all of Anton Webern’s work Williams was involved. Interestingly, Williams has made his dozens of transcriptions and compositions available and downloadable from his website for free. 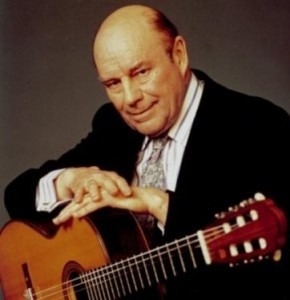 John Williams and Julian Bream, the elder of the two, were close associates. They formed a lasting friendship and often appeared together, performing works for two guitars. Many of their concerts were recorded.

Bream’s focus was to commission and perform more repertoire especially of British composers such as Britten, Maxwell-Davies, Tippett, and Walton. In the 1980’s he performed annually at Wigmore Hall and for four years worked on an exciting project—a series of films about the history of the guitar music of Spain for British television called Guitarra! He already had a background in playing lute but he learned the baroque and renaissance guitar, and the vihuela for the series. He too commissioned new works and he performed and recorded an album entitled 20th Century Guitar with Britten, Frank Martin, Henze and other contemporary composers, but Guitarra! revived interest in baroque and renaissance guitar music.

Julian Bream & John Williams
Brahms: Theme and Variations in D Minor, Op. 18b (arr. J. Williams for 2 guitars)
Bream was born in 1933 in London. He would lie “in ecstasy” under the piano when his father played. Bream was thirteen when he first heard Segovia. He says of the concert, “I trained the binoculars on his right hand—I wanted to see how that worked. So I had a wonderful guitar lesson… I found his control, the lack of movement and the sound colors he achieved when he wanted to vary the sound so enticing.” Bream’s playing is remarkable for its musical sentiment.

To coincide with Bream’s 80th birthday and the prestigious Gramophone lifetime achievement award in 2013, a 43 disc set of recordings—The Julian Bream Collection, which includes a 1976 BBC film My Life in Music—was released. 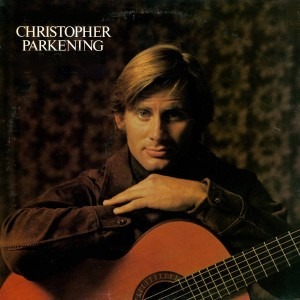 Born in 1947, American guitarist Christopher Parkening also left an indelible legacy. He began to play the guitar when he was 11 and then was introduced to the playing of Segovia. Parkening’s father pushed his son to wake him up at 5:00 am to practice before school. The hard work paid off when Parkening at the age 16 was accepted to participate in a master class given by the great Segovia in 1964. Soon he had a major recording contract. Parkening became America’s poster boy with his blond hair and good looks. Sadly he wasn’t enjoying the stardom as revealed in Grace Like a River his 2006 autobiography.

To everyone’s surprise he retired from performance in 1977 to enjoy the isolation of the mountains and wildlife of Montana but he missed music and fortunately for his audiences he made a return to the stage three years later. He re-established connections with several wonderful artists and soon was he recording spiritually based music such as the albums Simple Gifts in 1982 and A Bach Celebration in 1985. He also recorded standard works such as by Rodrigo, Vivaldi, Walton, Peter Warlock, and new music such as a concerto by film composer Elmer Bernstein, which was written for him.

Parkening decided to delve into educating the next generation of guitarists. He is distinguished professor of music and chair of the classical guitar department at Pepperdine University in Malibu, California in 2002, and he also established the Parkening International Guitar Competition in 2006. His set of guitar technique books is much in demand.

During an interview in Classical Guitar 1915, Parkening indicates that: “In dedicating myself to working with and training future generations of guitarists at Pepperdine, my goal is to emphasize the importance of beauty, warmth, and lyricism in musical performance.”

His outstanding career is featured on Virtuoso Performances— a special DVD of performances filmed in the 1970’s and 1998 and 2003. It also contains archival footage of Andrés Segovia circa 1950, with whom he maintained a lifelong friendship. His autobiography Grace Like a River—a Journey from Success to Joy is an intimate portrait of the sacrifices needed to establish and maintain his meteoric career.