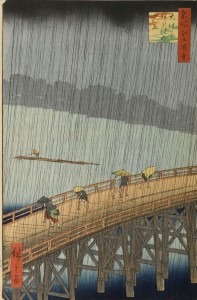 In three of my previous articles for Interlude (September 7, 2011, September 6, 2014 and December 13, 2015) I had concentrated on Debussy’s works related to the artistic currents of 19th century France — Impressionism, Post-Impressionism and Symbolism — all influenced by the arts of the Far East. Between 1865 and 1900 numerous exhibitions of Oriental Art in Paris influenced many painters, including Manet, Monet, Whistler and Van Gogh. Publications such as ‘Le Japon artistique’ (Artistic Japan) edited by Siegfried Bing, a prominent German art dealer, had become an inspiration not only for painters but also for many of the contemporary poets and writers, in particular Stéphane Mallarmé, a close friend of Debussy. In 1903 Bing organized an exhibition of three Japanese masters — Hiroshige, Hokusai and Kuniyoshi — the same year Debussy published three pieces for piano, called Estampes: Pagodes, La Soirée dans Grenade, Jardins sous la pluie (Prints: Pagodas, The Evening in Granada, Gardens in the Rain). 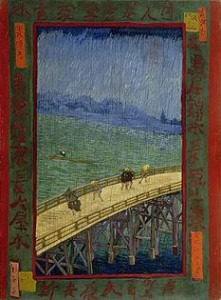 Estampes
Debussy not only collected Japanese prints but surrounded himself with artifacts from the Far East. The description of his own studio, which he occupied from 1905 until his death in 1918, tells us:

“In front of one of the windows sat his working desk covered with sheet music and an enormous wooden Chinese toad (named ‘Arkel’ by Debussy), a sort of fetish which accompanied him everywhere. On the fireplace mantle, dominating the room, an enormous Buddha statue… on the walls, books, musical instruments from the Far East, color reproductions of paintings by Whistler, Turner, Japanese prints, one of which – ‘The Great Wave’ of Hiroshige became the cover of Debussy’s composition ‘La Mer’. Lacquered panels in the room inspired Debussy’s composition ‘Poissons d’or’ (Goldfish)” — one of Debussy’s most favorite possessions” [Letters by Debussy to his wife Emma, published by Flammarion, Paris, 1935, pp. 34-35].

I had also discussed the importance Eastern music, i.e. the Javanese Gamelan, which Debussy mentioned in 1895 in his letters: “Do you remember the Javanese music, able to express every shade of meaning, even unmentionable shades . . . which make our tonic and dominant seem like ghosts ….” (Correspondence de Claude Debussy et Pierre Louÿs (1893-1904), ed. Henri Borgeaud, Paris: Librairie Jose Corti, 1945], p. 41) In another letter he wrote of “. . . Javanese rhapsodies, which instead of confining themselves in a traditional form, develop according to the fantasy of countless arabesques.” (ibid p. 22). With the use of oriental scales, church modes and in particular the extensive use of whole-tone scales, Debussy created light, color, nuance and atmosphere, and nebulous, haunting melodies whose textures were unprecedented at the time in European music.

In particular, Debussy’s late works, such as Le Martyre de Saint Sebastien/The martyrdom of Saint Sebastian and La Chute de la Maison Usher/The Fall of the House of Usher continued to break all musical norms. The former was derived from a mystery written by Gabriele D’Annunzio, who attempted to combine the myth of Adonis with the Christian sacrifice of St. Sebastian. Debussy’s composition combines cantata, opera and ballet, which was choreographed by Fokine, scenery and costumes by Bakst, both of whom were members of the Ballets Russes. Initially written in five acts lasting five hours, the work was later changed to the briefer Fragments Symphoniques/Symphonic Fragments, re-orchestrated by André Caplet. Bakst’s illustration for La Cour de Lys (The Court of the Lilies) seems like an oriental fantasy, and Debussy’s instrumentation enhances this impression with the introduction of symphonic fragments by the woodwinds, joined by muted cellos and double basses with a slowly appearing oboe melody, accompanied by harps — creating textures, musical arabesques and a vocabulary which refers only to itself — very similar to the poems of Mallarmé, in particular A Throw of the Dice Never Abolishes Chance. 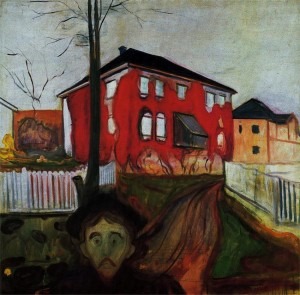 Le martyre de St. Sebastien: Fragments symphoniques
Debussy’s unfinished one act opera La Chute de la Maison Usher is based on Edgar Allan Poe’s 1839 short story The Fall of the House of Usher. The story and Debussy’s score convey a feeling of doom, fear and guilt, felt by an unnamed narrator who arrives at the house of Roderick Usher and his sister – both suffering from unnamed illnesses, which are also reflected in the physical and moral state of the house, which is also dying. From the beginning, the score contrasts the low modes of the oboe and the harmonics of the violins with fragments of melodies emerging and disappearing, creating a disjointed, dark atmosphere. Debussy scored the three male protagonists all in the baritone-range, projecting the image of a single consciousness for the three, fusing them into one. The action constantly changes from images of paintings, poems, a story and the action at the house — fusing dream and reality until the deaths of Roderick, his sister and the house itself, whose fragments sink into the ground – the ‘lucky’ narrator escaping — witness to the terrifying events. 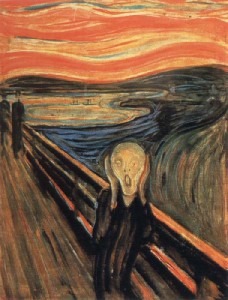 La chute de la maison Usher
Visually, Edvard Munch’s works reflect the same emotional atmosphere of doom, anxiety and illness, such as in his painting, The House with the Red Virginia Creeper, with windows like sightless eyes (Poe also describes the windows of the Usher mansion as “eye-like”), the house engulfed in red and a vision of horror on the face of man in the foreground. Many of Munch’s paintings, such as Jealousy 1 (black and white), Vampire (its original title Love and Death) or his most famous painting, The Scream, begin with intensely personal feelings but really reflect universal human experiences.

Debussy’s musical genius extended well beyond his time — his new concepts of tonality being an inspiration to many contemporary composers.