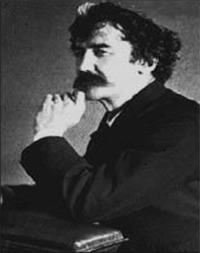 The recent exhibition at the Sackler Gallery in Washington D.C., ‘Whistler and The Thames’, focused on the works of James McNeill Whistler between 1860 and 1880. From the time Whistler left America in 1859 and installed himself in London, he always lived within the sight of the Thames. The Battersea area, the industrial area of London, provided him with a constant source of inspiration for his paintings — reflecting the modernity, the ever-changing landscape of harbor, shore and city. Whistler’s interest in, and the inspiration of the city of London can be compared that of the French poet Charles Baudelaire, who was inspired by the modernization of the city of Paris, transformed by Baron Haussmann. Baudelaire’s writings, which stressed the importance of harmonious picture surfaces, found their counterpart in Whistler’s works. Escaping the reality of everyday life, both artist and writer focused on the imaginary, rather than a ‘realistic’, depiction of the subject matter. 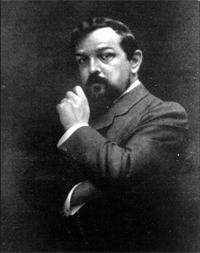 Whistler was very much inspired by the Japanese prints of Hokusai and Hiroshige, which provided inspiration for many French Impressionists, using different concepts of composition, space and time. Frequently, Whistler’s models were depicted not only in Japanese costumes but shown with numerous Asian objects — screens, porcelain and fans — such as in the painting ‘Rose and Silver: The Princess in the Land of Porcelain’ at the Freer Gallery in Washington, D.C. Particularly in his ‘Nocturnes’ paintings, Whistler focused on the dissolution of the subject matter towards abstraction, on its subtle tonal harmonies which replicate the abstract language of music. Many titles of his paintings are taken from the musical vocabulary, such as arrangements, symphonies, nocturnes and harmonies. 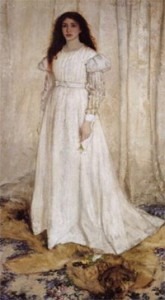 In his painting, ‘Symphony in White, No. 1: the White Girl’, submitted to the Paris Salon of 1863, Whistler used variations of white pigment, minimizing contrasts and flattening the perspective to create more abstract patterns. Similarly, in the painting of his mother, titled ‘Arrangement in Gray and Black, No. 1: The Artist’s Mother’ (1871) – the limited color scheme, flat brushstroke and flattened perspective recall Japanese prints.

In his famous ‘Ten O’Clock Lecture’ of 1885 Whistler relates the relationship between painting and music: 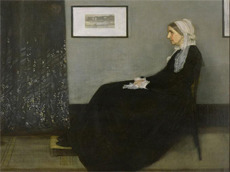 ‘Nature contains the elements, in color and form, of all pictures, as the keyboard contains the notes of all music. But the artist is born to pick, and choose, and group with science, these elements, that the results may be beautiful – as the musicians gathers his notes, and forms his chords, until he brings forth from chaos glorious harmony.

To say to the painter, that Nature is to be taken as she is, is to say to the player, that he may sit on the piano. That Nature is always right, is an assertion, artistically, as untrue, as it is one whose truth is universally taken for granted. Nature is very rarely right, to such an extent even, that it might almost be said that Nature is usually wrong: that is to say, the condition of things that shall bring about the perfection of harmony worthy a picture is rare, and not common at all’. 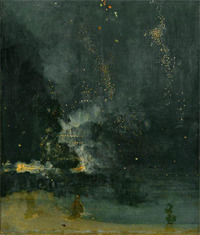 Whistler’s ‘Nocturnes’ are dark, atmospheric paintings of nighttime landscapes of the Thames and public gardens, where shapes of objects painted in a monochromatic palette and low perspective appear and disappear … “where — in Whistler’s words – the evening mist clothes the riverside with poetry, as with a veil and the poor buildings lose themselves in the dim sky, and the tall chimneys become campanili, and the warehouses are palaces in the night.. Nature… sings her exquisite song to the artist alone, her son and her master – her son in that he loves her, her master in that he knows her”.

With Whistler’s ‘Nocturnes’ we can establish the relationship to the works of Claude Debussy, who was inspired by Whistler’s paintings. Debussy’s composition ‘Trois Nocturnes’ (Three Nocturnes) were a direct response to Whistler and Baudelaire — where sound and color respond to each other. The three movements of the composition are ‘Nuages (Clouds), Fêtes (Festivals), Sirènes (Sirens)’. Here, the dissolution of the subject towards abstraction, the sensibility to changes of matter and light has its counterpart in the musical domain — in themes and development, in suspended harmonic and melodic functions, in the sonorous continuum with notions of timbre, mass and volume.

Debussy wrote in his introductory note to Nocturnes:

“The title Nocturnes is to be interpreted here in general and, more particularly, in a decorative sense. Therefore it is not meant to designate the usual form of the Nocturne, but rather all the various impressions and the special effects of light that the word suggests. ‘Nuages’ renders the immutable aspect of the sky and the slow, solemn motion of the clouds, fading way in grey tones lightly tinged with white. ‘Fêtes’ gives us the vibrating, dancing rhythms of the atmosphere with sudden flashes of light. There is also the episode of the procession (a dazzling fantastic vision), which passes through the festive scene and becomes merged in it. But the background remains consistently the same: the festival with its blending of music and luminous dust participating in the cosmic rhythm. ‘Sirènes’ depicts the sea and its countless rhythms and presently, amongst the waves silvered by the moonlight, is heard the mysterious song of the Sirens as they laugh and pass on”.

Whistler’s words ‘Nature… sings her exquisite song to the artist alone’ are reflected not only in his works but in Debussy’s compositions as well.