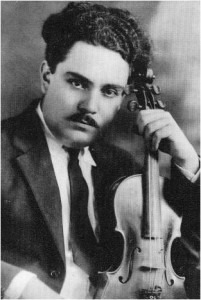 The Mexican composer Silvestre Revueltas (1899-1940) studied at the National Conservatory of Music in Mexico City and completed his musical education with the greatest distinction at the Chicago College of Music. He was known for his conducting and composition skills and he used those to promote modern music in his home country.

In 1938, he wrote the orchestral work Sensemayá, inspired by the poem of the same name by the Cuban poet Nicolás Guillén. The poem is about the ritual killing of a snake and starts out with a very rhythmic chant: ¡Mayombe—bombe—mayombé!

When you listen to the poet reading it himself, you can get an idea of the rhythmic soul of the poetry:

The poem with an English translation can be found here.

The poem appeared in 1934 in the political collection West Indies, Ltd.. Guillén and Revueltas first met in 1937 when the poet was invited to the Liga de Escritores y Artistas Revolucionarios (LEAR) Congress in Mexico while Revueltas was president of LEAR.

Writer Hega Zambrano explains the title and its significance: “The word sensemayá is a combination of sense (Providence) and Yemaya (Afro-Cuban Goddess of the Seas and Queen Mother of Earth). The poem poeticizes an Afro-Caribbean snake dance rite conducted by the practitioners of the Palo Monte Mayombe religion. … The killing of the snake, a sacred creature, symbolizes renewal, fertility, growth, and wisdom.” So, rather than being just a killing out of fear of the reptile, this death, like that in Stravinsky’s Rite of Spring, is for the betterment of mankind.

Equating Revueltas and Stravinsky is in keeping with Revueltas’ own fascination with the Russian-French-American composer. Just as the 1913 Rite of Spring is carried on its rhythms, so is Sensamayá: the opening poetic chant of ‘¡Mayombe—bombe—mayombé!’ is changed into a 7/8 tempo of ‘M’yombe-bombe-mayombé’ and this shortened rhythm becomes the bass ostinato for the piece, with the seventh beat reinforced by the use of the percussion instrument, the claves.

This highly rhythmic piece drives to the end, until, finally, the snake is killed.