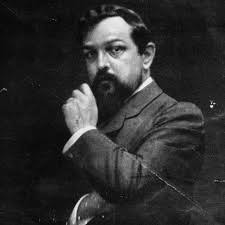 In 1902, after the successful debut of his opera Pelléas and Mélisande, Claude Debussy published many articles as a music critic under the pseudonym Monsieur Croche (similar to Paul Valéry’s pseudonym ‘Monsieur Teste’) in the ‘Revue Blanche’ and other publications. The ‘Revue Blanche’ was the vehicle of Symbolist writers, artists and musicians, a group which included Verlaine, Mallarmé, Proust, Vuillard, Bonnard, Sérusier, Denis and Toulouse-Lautrec, amongst others. Formed in 1888, they called themselves ‘Nabis’ (in Hebrew, ‘nabi’ means prophet), i.e., avant-garde artists inspired to renew art in their varied artistic endeavors.

La Damoiselle Élue
One of Debussy’s first compositions, ‘La Damoiselle Élue’ with its score frontispiece designed by Maurice Denis, was performed in 1894 in Brussels within an exhibition of works by Renoir, Gauguin, Sisley, Pissarro, Signac and Denis. Debussy’s interest in their works, i.e., their unsystematic, improvised, anti-classical and anti-conventional approaches, found a counterpart particularly in this composition, which he had based on a poem and painting by the Pre-Raphaelite painter, Dante Gabriel Rossetti. Denis’ frontispiece design also mirrored the Pre-Raphaelite style, with the figure’s flowing hair and its flat, two-dimensional form.

In some of the articles, Debussy’s Monsieur Croche talked about musical scores as painted canvasses, where the dynamic of expanding sound-colors in space, the appearance and disappearance of the musical phrase, anti-climaxes, ellipses, and multiple perspectives, all found their equivalence. The titles of some of his works, such as ‘Estampes’, ‘Images’, ’Arabesques’, suggests that Debussy also paid tribute to the typography and graphic form of musical notes, publishing initially with book- rather than music-publishers. 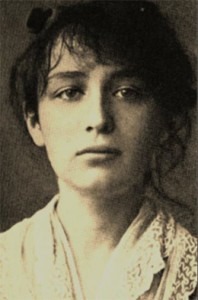 Inspired by the works of the Japanese artists Hokusai and Hiroshige, whose prints he collected, Debussy was also influenced by his personal friendship with, and works by Camille Claudel, an important sculptor, a sister of the writer Paul Claudel, and the mistress of Auguste Rodin. She not only encouraged Debussy’s interest in Oriental art, but her sculpture, The Wave, mirrors Debussy’s choice of Hokusai’s ‘The Great Wave’ for the cover of his composition, La Mer.

Debussy owned Claudel’s sculpture, The Waltz, a sculpture which seems to defy proper balance, opposing the massive bronze base, which seems to anchor the young Art Nouveau style couple to the earth, and the twisting, light and elegant movement of the figures, engulfed in a musical moment, in the whirl and movement of the dance as if they were to take flight.

Debussy also collected many colored reproductions of the works of Turner and Whistler. Whistler frequented Mallarmé’s circle in Paris, where he and Debussy met. From the 1890’s onward, Debussy made reference to the color of music in many of his compositions. Referring to one of his ‘Nocturnes’ from 1894, Debussy spoke specifically of the color of the work, where all of the different instruments come together and project a preponderance of sound, which, in this particular composition, would be that of a single color in a painting, namely grey.

In many of Turner’s paintings (Debussy admitted to a friend that he spent many hours in the Turner galleries in London’s Tate Gallery), light and shadow seem to hide, to diffuse the subject matter and the paintings seem to emanate an almost cosmic breath. Debussy’s composition ‘Nuages’ replicates this appearance and disappearance of sound, closeness and distance, sometimes moving slowly, sometimes ecstatically, sensually and cool at the same time – connecting directly to many of the Symbolist works around him, and to Turner in particular — for Debussy “le plus beau créateur de mystère qui soit en art – the most beautiful creator of mystery which exists in art”.