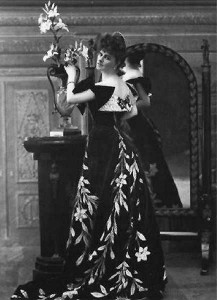 She was described as “that beautiful and unchallenged sovereign of sophisticated Paris; a leader of the smart intelligentsia and unchallenged queen of the upper monde; the most distinguished lady in the whole of Parisian society.” She was born Elisabeth de Caraman-Chimay in 1860. Her father was a Belgian prince and her great-grandfather was the Prince de Chimay who founded the Brussels Conservatoire. Her mother, Marie de Montesquiou, had studied piano with Chopin’s last student, Camille O’Meara, and also with Clara Schumann. A great passion for music and interest in arts patronage was a distinguished family tradition, and in 1881, Elisabeth married the Count Henry Greffulhe of the exorbitantly wealthy banking family. Eliseo Lucat was commissioned to compose the mazurka Soyez heureuse for piano to musically enrich the wedding celebrations. Turns out that Count Henry Greffulhe was not a particularly nice man. Unfaithful, possessive and strictly conservative, he imposed severe restrictions on his wife’s social activities throughout the years of their marriage. As a reaction, Elisabeth established her own music salon and opened it to the most enlightened contemporary Parisian artists.

Greffulhe met Fauré in 1887, and invited him to stay at her summer villa on the cliff-tops overlooking Dieppe. Fauré quickly started to organize concerts for her salon at 8 rue d’Astorg, and referred to her in gratitude as his “King of Bavaria!” He dedicated the famous Pavane to Greffulhe, and she arranged for it to be played according to the composer’s wishes by an invisible orchestra at a night party organized on the island in the Bois de Boulogne on 21 July 1891. That musical performance was accompanied by mime, dance and a Verlaine-inspired text written by Montesquiou. With her marriage steadily deteriorating, Greffulhe expanded her activities and influence outside the private sphere of her home. “Discouraged from entering the labor market, educated and displayed as status symbols for their husbands, wealthy women with leisure time looked to involvement in cultural activities to escape the isolation of their homes.” In the early 1890s Greffulhe started to organize her first public concerts by renting one of Paris’ biggest concert halls, all the necessary performers as well as the Opéra’s conductor, and chose to perform Handel’s Messiah. Praised as one of the greatest events of the year, the Countess Greffulhe gained a reputation in society as a “modern” woman with progressive political ideas and innovative musical taste. 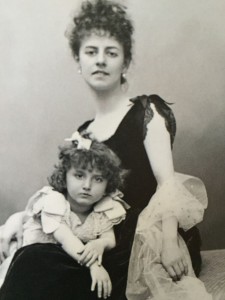 With her daughter
Credit: https://i.pinimg.com/

Empowered by the success of her Messiah, Greffulhe was looking to found an organization for large projects with the aim of promoting living French composers. This notion immediately appealed to nationalists and patriots interested in reevaluating French culture after the defeat in the Franco-Prussian war. As such, the “Société des Grandes Auditions Musicales de France” was born in 1890 with a committee that included Franck, Chausson, Chabrier, Fauré, d’Indy, Messager, Widor and Camille Chevillard. The declared aim was to “give performances of complete works by composers old and new, and to be a center for French composers, to ensure to our country the first performance of their works.” The press unanimously stated, “This society is not a reunion of dilettantes confined in the corner of our divided social world, but an eminently national association serving a public need.” The project quickly gained financial support from numerous members of the aristocracy, which included donations from over 600 high-society women. The Society was looking to perform works six times in Paris, and twice in the provinces, and the premiere performance featured Berlioz’s Béatrice et Bénédict.

The Society continued to mount production until 1913, with Countess Greffulhe praised by the press as the “Queen of Music” in Paris. By using her diplomatic connections, influential friendships, artistic patronage and philanthropic ideas, Greffulhe expanded the influence of aristocratic patronage into the public sphere. While still hosting musical events in the private sphere of their homes she nevertheless initiated a paradigm shift in inspiring wealthy women to turn their financial support to public institutions and individual composers.