Learning from Other Genres 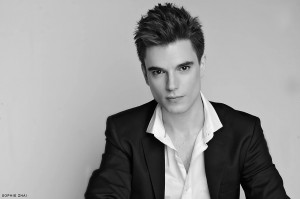 Performing an eclectic mix of music in Hong Kong this month is young American pianist Andrew Tyson. Originally from North Carolina, he studied at the Curtis Institute and went on to New York’s prestigious Juilliard School. Andrew is now based in Philadelphia – ‘You have access to New York when you want, but the atmosphere in Philadelphia is a bit more conducive to work, and it provides more respite after a long period of travelling!’ he laughs.

Travelling forms a large part of Andrew’s life – does he enjoy it?

‘Absolutely. When I step back and think about the kind of life I have, I feel endlessly grateful. I never would have imagined, growing up learning the piano, that one could make money, be travelling around the world and meeting wonderful people. It’s an incredible privilege and I try to remind myself of that every day.’

‘Of course, the physical aspect of travelling can be quite tiring, but really just being in a new, unfamiliar, exciting environment is really exciting, both musically and personally. It’s one of the best things about the classical music world, that everybody comes together around music. To see this has been one of the most valuable things about my musical education.’

Andrew’s mother took piano lessons at an earlier age, and both he and his sister learned the piano as children, but Andrew is the only professional musician in his family. ‘It was nice for me to come to music on my own terms, and discover it for myself,’ he says – although it was a while before he felt part of a larger classical music community. When Andrew was 16, he went to the Eastern Music Festival in Carolina, and there was surrounded by passionate musicians his own age. For him, it was the lightbulb moment. ‘That, more than anything else, made me feel like I could make that my vocation, that this was something that people did.’ 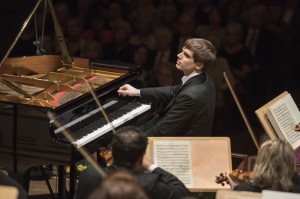 Now, Andrew plays all over the world, with an incredibly busy schedule, and so perhaps unsurprisingly, likes spending what little spare time he has with friends and family.

‘Time spent with friends and family is the most precious. I have some amazing friends, so I’m lucky in that way. I also like to listen to music – and not just classical.’ Andrew’s most recently-played album is Pink Floyd’s Dark Side of the Moon, and in Andrew’s eyes, pop music and Pink Floyd can teach us as much as Scarlatti, Schubert, or Scriabin.

‘I think classical musicians can be a bit snobby about their preferences. Not only can it be off-putting for audience members, but I think we can really learn a lot from other genres. One thing that strikes me is that classical performers don’t tend to compose or improvise, and composers don’t tend to perform. In any other genre, it’s not just common – it’s the norm.

‘I think not only having listened to other kinds of music, but even just having had the experience growing up of playing a little electric guitar in some different bands and ensembles really informs how I play music that’s written down.’

Details of Andrew’s concert can be found here.