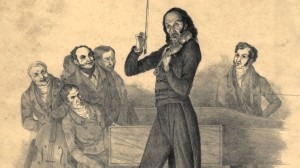 Niccolò Paganini (1782-1840) is customarily credited with representing the pinnacle of violin technique. At a time when other violinists focused their attention on matters of intonation, Paganini developed innovative and unique special effects for the instrument.
These technical advances, among them pizzicato technique for both hands, extended harmonics and the simultaneous sounding of large musical intervals, were considered unplayable at the time. Paganini’s innovations made not only for exciting performances; they also greatly expanded the sonic capabilities of the instrument. Technical developments aside, Paganini’s extensive career as a solo artist established a new brand of performing musicians, the touring virtuoso. In a brilliant strategy of self-promotion, he even circulated the rumor that he had sold his soul to the devil in exchange for his uncanny technical abilities. Contemporary eyewitnesses report that during performance “his eyes would roll into the back of his head while playing, revealing the whites. He played so intensely that women would faint and men would break out weeping.” Yet, there was more to Paganini than being the greatest violinist of his age.
While the majority of his compositions are a series of lightweight vehicles for his personal stage career, he nevertheless wrote a number of works that did not call for his personal involvement.

Niccolò Paganini: Concertino for Horn, Bassoon and Orchestra, MS 65
The Concertino for Horn, Bassoon and Orchestra was composed around 1831 for the famous bassoonist Antoine Nicholas Henry, who regularly played at the Paris Opera Comique. Rather than being overtly virtuosic, the work cleverly makes use of the formal and musical principles of the ‘sinfonia concertante,’ by inhabiting a world of classical sensitivity and fluency. Cast in 2 movements, the opening “Larghetto” builds from a dignified melody delightfully exchanged between the two solo instruments. The “Allegro moderate” derives from the opening movement, but it is colored by unexpected harmonic progressions and vigorous tutti passages. In the operatic style of Rossini, the entire work is based on the musical dialogue between the two surprising solo instruments. Publishers, it seems, were not entirely comfortable with issuing a Paganini work for bassoon and horn; it did not appear in print until 1985!