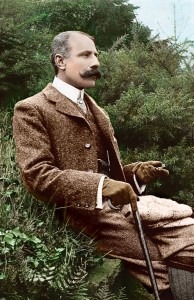 Born in a small village near Worcester, Edward Elgar (1857-1934) initially earned his living by working in the office of a local solicitor. Although he received no formal musical training, he nevertheless eagerly participated in a variety of local musical activities. He succeeded his father as organist at St. George’s, conducted the orchestra and choir of the Worcester Amateur Instrumental Society, and played the violin for W.C. Stockley’s orchestra at Birmingham. His early attempts at composition are patterned after the music of Schumann, Mendelssohn, Brahms and Wagner, but plans to attend the Leipzig Conservatory were never realized. With his A-minor quintet, one of three chamber compositions dating from the concluding years of WW1, Elgar returned to the themes and musical aspirations of his youth. Unwilling to participate in modernist musical experimentations, Elgar provided a summary review of 19th-century European musical practices from a distinctly English perspective.

Edward Elgar: Piano Quintet in A minor, Op. 84
The first movement opens with a hauntingly beautiful introduction that canvasses a slow-moving melodic fragment played by the piano against a rhythmically animated commentary given by the strings. Sounding at once rhapsodic, and almost improvisatory in nature, Elgar himself described the introduction as “ghostly stuff.” Programmatic narrative aside, the musical discourse is unmistakably Brahms, as Elgar introduces a compendium of musical ideas that shape and propel the continuation of the movement. This includes the recasting of the rhapsodic elements into a stylized dance—in this case with a Spanish flavor, a quasi-contrapuntal development that places the emphasis on the integrity of the inner voices, and a Coda that quietly returns to the haunting opening. If the opening movement paid homage to the constructivist side of Brahms’s musical personality, the Adagio regales in the composer’s poetic inferences, tenderly exploring the musical tensions of an extended emotional narrative. The final movement, also relying on a slow musical introduction, provides the fitting nostalgic conclusion to Elgar’s musical gesture of resignation.