Composers Anecdotes
Minors of the Majors
Georg Philipp Telemann: Overture in A minor, TWV 55:a1
by Georg Predota May 9th, 2016
Tags: Telemann 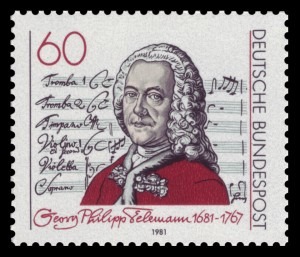 In 1723, the city council of Leipzig was looking to fill the position of the director of music, which included the appointment of a cantor at the church of St. Thomas. According to the job description, they were hoping to hire a “prolific” and “modern” composer. Not surprisingly—their choice was unanimous—they offered the position to Georg Philipp Telemann (1681-1767), considered the greatest living composer besides Georg Friedrich Handel. Since Telemann’s application to Leipzig had only been a ploy to secure a pay rise from his Hamburg employer, he quickly turned down the offer, and Leipzig was forced to approach J.S. Bach.

Telemann’s primary reason for staying in Hamburg was connected with his printing and publishing business. Initially, he started publishing literary work but in due course issued forty-six editions of his own works and distributed them through an extensive network of agents across Europe. As I have written elsewhere, Telemann was forced to dissolve his publishing business in 1740 to repay the large gambling debts accumulated by his second wife, Maria Catherina Textor! Telemann’s enviable international reputation rests on roughly 3600 compositions, which include approximately 130 “Ouvertures” that make up the great part of his orchestral output.

TWV (Telemann Werkverzeichnis) 55:a1, dating from around 1725, was originally scored for strings and basso continuo, but various arrangements do exist. This a-minor Overture unfolds as a loose collection of stylized dances arranged in the form of a “Suite.” The opening “Overture” movement, with its characteristic dotted rhythm is contrasted by a lively and entertaining Allegro, and concludes with an embellished statement of the opening theme. A charming “Rondeau” featuring a simple refrain structure is followed in quick succession by the French-inspired “Gavotte” and the Italianate “Courante.” The “Rigaudon,” a French dance in quick duple meter swiftly gives way to a “Forlane”—an Italian folk dance originating in the Friuli Venezia Giulia region—before this delightful composition concludes with a stately “Menuet.”

Georg Philipp Telemann: Overture in A minor, TWV 55:a1