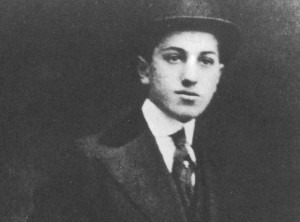 George Gershwin was the son of seriously poor Jewish immigrants! During his youth he could never have imagined that his Rhapsody in Blue, premiered on 12 February 1924, would single-handedly propel him to international fame. This musical smorgasbord of combining elements from classical music with jazz influences fuelled a deep infatuation with American popular musical styles on the European musical landscape, and within a couple short years of the premier, several million copies of the recording had been sold. Of course, Gershwin had long known that he had a gift for writing fluent and immediately compelling melodies. In his tune book, which he carried religiously with him wherever he went, he incessantly jotted down his numerous melodic inspirations. However, Gershwin quickly realized that he needed a bit of help with harmony, counterpoint, and orchestration. And so he engaged the Hungarian composer and violinist Edward Kileny, who had immigrated to the United States in 1908. Kileny soon established a private studio in New York City, and Gershwin faithfully went for weekly lessons over a period of almost 5 years. Around 1919, Gershwin brought one of his tunes to Kilenyi, and his teacher initially suggested using the melody in a piano piece. Once this exercise was completed, Gershwin scored the composition for string quartet and titled it “Lullaby.” Apparently, the composition circulated in private copies among his friends, and Gershwin used the Lullaby opening in his one-act opera Blue Monday, premiered in 1922. The manuscript of Gershwin’s Lullaby sat on Ira Gershwin’s shelf for decades, and it was only published in 1968, with the Juilliard String Quartet making a first recording in 1974. After a bit of tuning up, a swinging blues melody emerges that eventually makes way for a plaintively muted central section. After a delicious moment of hesitation, the initial blues returns and the violins take the melody into high harmonics. Ira Gershwin said of the piece, “It may not be the Gershwin of Rhapsody in Blue, Concerto in F, or any of his other concert works, but I find it charming.”