Composers Inspiration
Trouble in the Barnyard: Stravinsky and Renard
by Maureen Buja May 24th, 2016
Tags: Stravinsky 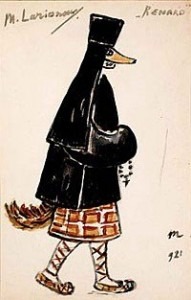 Sketch by Larinov for the staging of Renard

Renard, the Fox, is a long-established character in the folk tales of many countries. He’s reputed to be sly, be a creature cunning and trickery. Stravinsky took up the character in his comic masterpiece Renard, or, to give it its full original title, The Fable of the Vixen, the Cock, the Cat and the Ram. A burlesque for the stage with singing and music.

Stravinsky was commissioned in 1915 for a work that could be performed in the salon of Princesse Edmond de Polignac, the former Winnaretta Singer, heiress to the Singer Sewing Machine fortune. Stravinsky created a new kind of work that combined singing and acrobatic dance. The performance for the Princesse fell through and the work’s premiere was given by the Ballets Russes in Paris in 1922. Nijinsky danced the role of Renard to choreography by Bronislava Nijinska. Stravinsky was quite pleased with the production, particularly with the Russian touches that were added to the action, such as imitating the salutes of Russian Army. The Ballets Russes did the work again in 1929, this time with choreography by Michel Fokine but Stravinsky wasn’t as happy with this production, saying that ‘was ruined chiefly by some jugglers Diaghilev had borrowed from a circus.’ The artist Marc Chagall was to have done the sets, but refused.

The story is a moralizing one, with Renard the Fox, who appears dressed in a nun’s outfit, fooling the three animals before coming to a sad end. 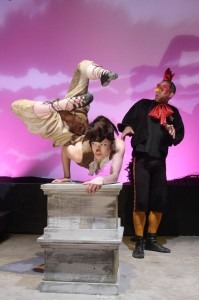 The Lady Fox (Breonna Noack) and the Rooster (David Hunt) in Renard at Oakland Opera Theatre, 2008

Robert Craft, Stravinsky’s amanuensis, wrote this synopsis of the action:

A rooster crows from a barnyard perch, boasting of his harem of hens. A fox approaches, disguised in religious habit, and tricks the rooster into coming down and confessing his sins…. The rooster complies and is caught. A cat and a goat respond to the fowl’s calls for help and chase the fox away. The rooster returns to his perch, the fox reappears, this time offering grain and fresh green peas as an inducement to descend , and the action is repeated, the bird descending and being caught, the cat and goat again coming to the rescue. They turn the tables on the fox….’ and tearing him to bits ‘and the pantomime ends with the embroidered unison first part of the opening march…’

One of the unusual things that Stravinsky does throughout the work, starting in the very first measure is to constantly shift the time signature – we’re constantly thrown off the beat and thus Stravinsky lets us know we’re in the world of animals. 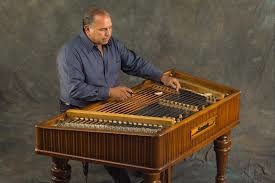 When you listen to the fox’s tempting of the foolish rooster, starting around 3:30, the false cleric parodies a church chant, signalling its false piety. The second time the rooster is caught, he prays to various saints, another mockery of the Church.

Setting the work in a barnyard gives Stravinsky plenty of opportunity to imitate sounds and one of the most important instruments he used for this was the cimbalom.

The cimbalom, or guzli in Russian, was a kind of hammered dulcimer, it has a brittle sound but is capable of quick arpeggios. Around 13:30 in the work, you can hear the interplay between the voices and the cimbalom, but as you listen to the work again, you’ll hear how much it is integrated into the entire work.

The original work was to a Russian libretto by Stravsinky, it has been translated into other languages, following Stravsinky’s stipulation that it should be performed in the language of the country in which it was being performed. Stravinsky said once to Robert Craft that, for him, the Russian one was the one he like best.

This moralizing tale takes on a number of opponents, including the church, but, in the end, remains a bit of fun!