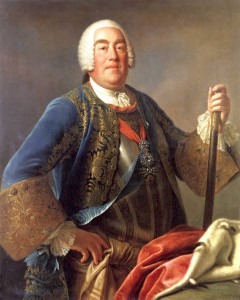 With the possible exception of the “Coffee Cantata,” Bach’s secular cantatas are less known and hardly ever performed. Generally commissioned by personalities in public life for performance at special occasions, like weddings, birthday celebrations and social and political events, these works were usually performed only once. Bach took extraordinary care of his compositions, and as a result more than twenty secular cantatas have actually survived. Regrettably, more than thirty have been documented as being lost, and it is generally assumed that Bach wrote many more. During Bach’s lifetime, there was no fundamental difference between sacred and secular music. As such, it is not surprising that Bach reused the best of his secular cantatas in the great religious pieces. The Christmas Oratorio, for example, is to a large extent constructed of existing movements taken from Cantatas BWV 213 and 214.

Johann Sebastian Bach: Preise dein Glück, gesegnetes Sachsen, BWV 215
For the anniversary of the accession of Augustus III to the Polish throne in 1734, Bach composed the cantata of homage Preise dein Glücke, gesegnetes Sachsen (Value your good fortune, blessed Saxony.) Students of Leipzig University presented the work on the occasion of a visit by Augustus the Third. The son of “Augustus the Strong,” who had sired nearly four hundred illegitimate children during his thirty-year reign, was more interested in banquets, opera and the arts. It is not surprising therefore that he became primarily known as “Augustus the Fat.” There can be no doubt that Bach based the powerful opening chorus on the reputation of the father rather than that of the son. Uniquely, Bach employed a double choir reinforced by three trumpets and drums, flutes, oboes, strings and continuo. If the music for much of the opening movement sounds familiar to you, you are absolutely right! However, Bach did not derive it from an earlier work but subsequently reused it as the “Osanna” in his B-minor Mass!