Most of the music and art connections have been fairly simple: a picture of art and piece of music. In the case of Grünewald and Hindemith, we have a more complex inspiration that also has a political side.

Matthias Grünewald (c. 1470 – 1528) fought against the new Renaissance style of classicism and worked in the older style of late medieval Central European art into the 16th century. The work that inspired Paul Hindemith was his monumental altarpiece created for Isenheim sometime in the decade after 1506.

The Monastery of St. Anthony, for which the altarpiece was created, contained a hospital that specialized in the treatment of the plague and skin diseases. This is the reason that the figure of Christ on the altarpiece has skin sores, to show patients at the hospital that there was an understanding on the highest level of their medical conditions.

Now, to add the political component, the Monastery is located in Colmar, in Alsace. The area has passed back and forth between ownership of France and Germany. Germany took over the region in 1870-71 following the Franco-Prussian war. The altarpiece came to represent the essential character of the German nation. During WWI, the altarpiece was removed to Munich, where it was held in high regard and venerated for its German nature. It was returned to the Monastery after the war, when the whole area was returned to France.

Paul Hindemith (1895-1963), from a small city near Frankfort, started as a violinist and became leader of the Frankfurt Opera Orchestra, then moved to the viola when he founded the Amar Quartet, and captured the world’s attention for his compositions when his works were performed at the ISCM meeting in Salzburg in 1922. His early atonal compositions led to his becoming labelled a ‘degenerate’ composer by the National Socialist government and he was publically denounced in 1934 by Joseph Goebbels, the German Minster of Propaganda. However, by the early 1930s, his music was largely tonal and was roundly defended by conductor Wilhelm Furtwängler. In the end, Hindemith moved to Switzerland in 1938. He went onto help Turkey reorganize its national music education programs before immigrating to the US in 1940.

His 1938 opera, Mathis der Maler (Mathew the Painter) used the creation of the Isenheim altarpiece as representative of not only Grünewald’s struggle for artistic expression but also Hindemith’s own struggle for public expression under government repression. Hindemith had completed the opera in 1935, while he was still in Germany, but it couldn’t be produced; the political message of the opera was not missed by the government. 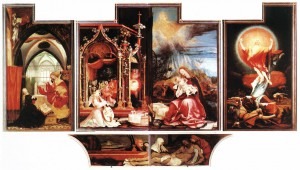 In the opera, Mathias is faced with the religious problems between the Catholics and the Lutherans, the peasants’ revolt, book burnings, and other actions that might be found to have parallels in then-modern Germany (such as the enmity between the German government and the communists, revolts against the government, and book burnings). The Prelude (Overture) is a concert of angels, and shows right from the beginning Hindemith’s very tonal language.

Hindemith: Mathis der Maler: Prelude: Concert of Angels (Bavarian Radio Symphony Orchestra; Rafael Kubelik, Conductor)
In the sixth scene of the opera, a dream sequence brings in images from the altarpiece. Mathias is in hiding in the forest and visions come to him that are partial reenactments of selected scenes from the altarpiece. Mathias, in the garb of St. Anthony (patron saint of the Isenheim monastery) is beset by temptations: luxury, power, and seduction (right side of the opened altarpiece) but resists them to heed the call to his duty given by St. Paul: ’go forth and paint.’

Hindemith: Mathis der Maler: Tableau VI Scene 3: Wenn du demütig dem Bruder dich bogst (James King, St. Paul; Dietrich Fischer-Diskau, St. Anthony / Mathis; Bavarian Radio Symphony Orchestra; Rafael Kubelik, Conductor)
This final scene, set in the hermitage of Saint Paul, has Mathis, in the guise of St. Anthony, face up to his failings and, in doing so, transcend them – as he humbles himself, he is given his mission to create the immortal altarpiece.

It’s unusual for a musical work to show the inspiration for a masterpiece, rather than reflecting the final work. Hindemith, however, was an unusual composer who could take us beyond the surface to the difficulties that could underlie inspiration.