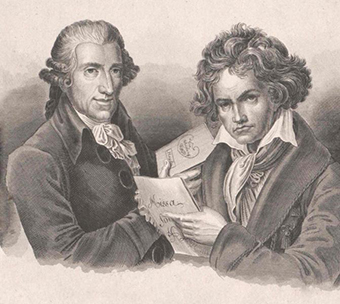 By placing Ludwig van B. on a musical pedestal we tend to forget that he was surrounded by a whole host of talented composers and musicians who competed for his audience. And as we all know, Beethoven was a difficult person to get along with at the best of times, and his professional relationships with fellow composers was a rather thorny affair as well.

Undoubtedly, the most important relationship in Beethoven’s early life was his apprenticeship with Joseph Haydn. Beethoven started lessons with Haydn in November 1792 and became quickly frustrated. Haydn had lots of things on his plate in terms of his own compositions and commissions, and he probably didn’t pay much attention to the needs of his young charge. In addition, Haydn departed Vienna for his second trip to London in 1794 and only returned more than a year and a half later. When Beethoven performed his newly composed Piano Trios opus 1 in August 1795, Haydn was the guest of honor. Not only did Haydn suggest that the third trio needed more work, but also that Beethoven should included the phrase “pupil of Haydn” underneath his name. Beethoven was horrified and really never forgot Haydn’s criticism. However, there was no seriously falling out between the two men as Beethoven dedicated his next opus, the set of three Piano Sonatas, opus 2, to Haydn. On the occasion of Haydn’s 76 birthday, Beethoven is said to “have knelt down before Haydn and fervently kissed the hands and forehead of his old teacher.” Whether this story holds true or not, we now know that Beethoven always referred to his old master in terms of reverence. 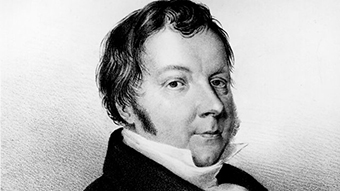 While Beethoven’s relationship with Haydn can be described as professional and cordial, his interaction with the former child prodigy and student of Mozart, Johann Nepomuk Hummel was less friendly. For one, Hummel was alongside Beethoven, considered the finest performer of his day. And they were rivals in romance as well, as both were in love with the same woman, the singer Elisabeth Röckel. We know that Hummel won the day, “because he had an appointment and had not the misfortune of being hard of hearing.” The story of Beethoven’s and Hummel’s first professional meeting, fancifully told in Schindler’s Beethoven biography, set the stage for a spectacular falling-out between the two musicians.

In 1810, Beethoven travelled to Eisenstadt for the premiere of his Mass in C, Op. 86, which had been commissioned by Prince Nikolaus II Esterházy to mark the name day of his wife, Princess Marie Hermenegild. The performance did not go well, and the Prince made some disparaging remarks to Beethoven. Apparently, Hummel, who was standing close by, was heartily laughing at the Prince’s comments. Always hypersensitive when it came to his music, Beethoven promptly left Eisenstadt and carried a drudge for many years. Further disagreements arose when Hummel made arrangements of Beethoven’s symphonies. Beethoven strongly objected, but eventually his hostility towards Hummel softened somewhat. Hummel did not see Beethoven again until 1827 when he visited his ailing rival in Vienna. Beethoven apparently was overjoyed to see him, and Hummel was deeply affected by Beethoven’s sickness and visited him three times while he was on his deathbed. 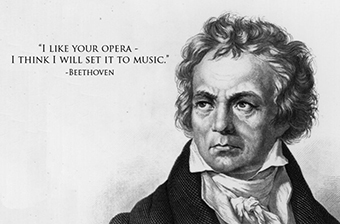 The relationship between Gioacchino Rossini and Ludwig van B. has been much discussed in the greater context of the emergence of the twin-musical styles at the beginning of the 19th century. Beethoven was cordial to Rossini at their only meeting in Vienna in April 1822. Rossini gave an insightful account of that meeting, “In Vienna I attended for the first time the performance of one of his symphonies, the Eroica. That music overwhelmed me. I had a single thought: to know that great genius, to see him, just once. I spoke of this with Salieri whom I knew to be in rapport with Beethoven… Ascending the stairs that led to the miserable dwelling, which the great man inhabited, it was certainly hard work to control my emotion. When the door was opened, I found myself in a kind of dirty and frightfully disorderly attic. I remember above all that the ceiling, immediately under the roof, was covered from great cracks through which the rain must have poured in. There was an indefinable sadness that emanates from its face, while under the thick eyebrows, as in deep caverns, the eyes, even if small, seemed transfixed. His voice was sweet and a little veiled. When we entered, without drawing attention to ourselves, we stayed some moment bent over a page of music as he finished correcting it. Then, raising his head, he said to me abruptly, in a sufficiently comprehensible Italian: Ah! Rossini, you are the author of The Barber of Seville? I offer my compliments; it is an excellent opera buffa. I have read it with pleasure and I enjoyed myself. So long as there is an Italian opera, it will be performed. Never try to do anything other than comic operas; to want to succeed in another style would force your nature… It makes me painfully aware just how isolated Beethoven was in his deafness.” Beethoven in turn told a friend, “Rossini is a talented and a melodious composer, his music suits the frivolous and sensuous spirit of the times, and his productivity is such that he needs only as many weeks as the Germans do years to write an opera.” Above all, Beethoven was intensely jealous of Rossini’s popularity, and he could never fully come to terms with the fact that Viennese audiences were swept away by Rossini’s melodies. 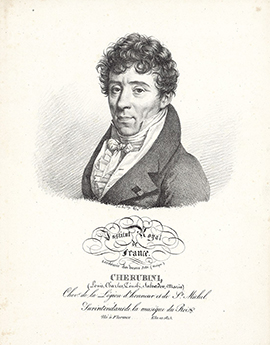 One afternoon in 1817, the English composer Cipriani Potter was taking a stroll through the woods with Beethoven. Curious, Potter asked Beethoven, “Apart from yourself, who do you considered the greatest living composer?” While Beethoven seemed initially startled, he eventually gave an equally startling answer in “Cherubini.” Beethoven had always held Cherubini in high esteem, personally writing to him in 1823, “I am enraptured whenever I hear a new work of yours and feel as great an interest in it as in my own works—in brief, I honor and love you.” Beethoven proclaimed Cherubini “Europe’s foremost dramatic composer,” and he admired Cherubini’s Requiem in C minor to such extend that he ordered it performed at his own funeral. Cherubini, on the other hand, wasn’t much impressed by Beethoven. He attended the first performance of Beethoven’s opera Fidelio and found it wanting. He also described Beethoven’s piano style as “rough,” and famously described Beethoven as “an unlicked bear cub.” And he described the whole man and everything about him with the single word “brusque.” Beethoven’s enthusiasm for Cherubini, however was not merely musical, it had a definite political angle as well. Like many other Viennese, Beethoven was attracted by the grand rhetorical manner of operas from revolutionary France, regaling in their contemporary realism and heroic plots. And with his “Eroica,” Beethoven had already personalized the political symphony.