Ludwig van B. and Franz Schubert resided in the same city for 31 years, but we don’t really have conclusive evidence that they ever met. We do know that they moved in different social circles, and that Schubert admired Beethoven as an artist and a composer. Schubert’s first substantial instrumental composition published in 1822, the Variations on a French Theme for Piano Duet is dedicated to Beethoven by “his worshipper and admirer Franz Schubert.” Beethoven is said to have played Schubert’s Variations with his nephew Karl, and he seems to have enjoyed them. Apparently, Schubert wanted to personally present the dedicatee with a copy, but he got really flustered when Beethoven pointed out a minor problem. 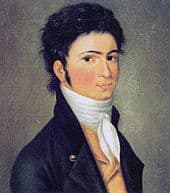 Another version of the story suggests that Beethoven wasn’t home when Schubert came calling, and the variations were left with the house staff. Schubert almost certainly attended Beethoven’s “Akademie” in Vienna on 7 May 1824, when the Choral Symphony was first performed. Schubert did see himself as the true successor to Beethoven, and when the elder composer was on his deathbed in 1827, Schubert apparently visited him multiple times. It is also said that Schindler brought Beethoven some manuscripts of Schubert’s song to distract him, and Beethoven remarked, “Truly in Schubert there is the divine spark.” Schubert was one of several torchbearers at Beethoven’s funeral, and on his deathbed, Schubert requested a performance of Beethoven’s C-sharp minor String Quartet, Op. 131. 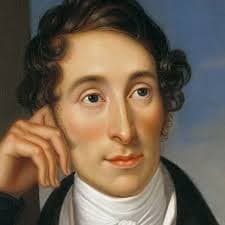 Carl Maria von Weber published a biting satire on Beethoven’s Fourth Symphony in 1809. Since Weber eventually pronounced Beethoven “ripe for the madhouse,” his critique is predictably not for the faint of heart. “I have just come from the rehearsal of a Symphony by one of our newest composers; and though, as you know, I have a tolerably strong constitution, I could only just hold out, and five minutes more would have shattered my frame and burst the sinews of my life. I have been made to caper about like a wild goat, and to turn myself into a mere fiddle to execute the no-ideas of Mr. Composer… The first violoncello (bathed in perspiration) says that for his part he is too tired to speak, and can recollect nothing like the warming he has had since he played in Cherubini’s last opera. The second violoncello is of opinion that the Symphony is a musical monstrosity, revolting alike to the nature of the instruments and the expression of thought, and with no intention whatever but that of mere show-off… First a slow movement full of short disjointed unconnected ideas, at the rate of three or four notes per quarter of an hour; then a mysterious roll of the drum and passage of the violas, seasoned with the proper quantity of pauses and ritardandos; and to end all a furious finale, in which the only requisite is that there should be no ideas for the hearer to make out, but plenty of transitions from one key to another—on to the new note at once! Never mind modulating!—above all things, throw rules to the winds, for they only hamper a genius.” At this point, Weber says in his own person, “I woke in a dreadful fright, lest I was on the road to become either a great composer or—a lunatic.”

Eventually, Weber came to admire Beethoven personally, and he regularly played and conducted his music. When Weber visited Beethoven in 1823, he requested that Beethoven look at the score of his opera Euryanthe and make whatever changes he thought advisable, in order to “redeem it from the unfortunate reception that its first performance had elicited.” Beethoven apparently turned down the request after looking at the score on the grounds that any revisions by another hand should have been made before the opera had been performed. 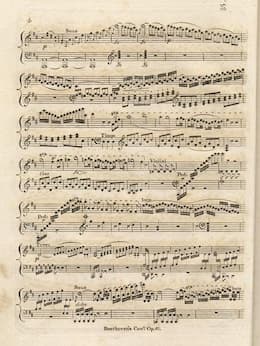 In his time, Muzio Clementi was one of most revered musicians. He was a virtuoso performer, and as a composer admired by Czerny, Chopin and Beethoven. In fact, Beethoven wanted his nephew Karl to learn Clementi Sonatas during his piano lessons, recommending “his works are excellent as practice studies, for the formation of taste, and as truly beautiful pieces for performance.” In fact, Beethoven is reported as saying, “They who thoroughly study Clementi, at the same time make themselves acquainted with Mozart and other composers; but the converse is not the fact.” 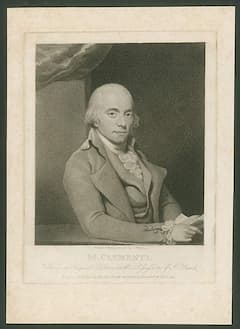 Beethoven also admired Clementi’s role as a music businessman. From 1802 until 1810 Clementi went on a long journey to the Continent, selling his own and other works to publishers and accepting the works of other composers for publishing purposes. In April 1807 he met Beethoven in Vienna. In a letter to his business partner Collard he described the meeting, “Beethoven started grinning at me in public places. Of course, I tried hard not to discourage the young composer. Finally, I was able to conquer the ‘haughty beauty Beethoven’.” They agreed that Clementi would publish a number of Beethoven composition, for which the composer received 200 Pounds. In the end, only the three string quartets Op. 59 and the adaptation of the violin concerto was published under this agreement. 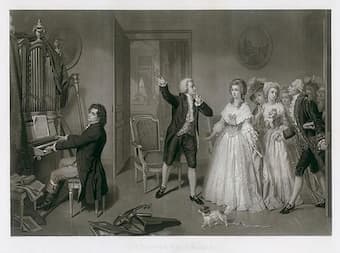 Wolfgang Amadeus Mozart was an established composer in Vienna when the 16-year-old Beethoven first visited the city in 1787. It has been suggested that Beethoven was taken to meet Mozart, and that he played for him. The 19th-century biographer Otto Jahn reports, “Beethoven made his appearance in Vienna as a youthful musician of promise in the spring of 1787, but was only able to remain there a short time; he was introduced to Mozart, and played to him at his request. Mozart, considering the piece he performed to be a studied showpiece, was somewhat cold in his expressions of admiration. Beethoven, noticing this, begged for a theme for improvisation, and, inspired by the presence of the master he revered so highly, played in such a manner as gradually to engross Mozart’s whole attention; turning quietly to the bystanders, he said emphatically, mark that young man; he will make himself a name in the world!” Supposedly, Beethoven also had a few lessons with Mozart, but since this account does not come from a contemporary source, it is somewhat suspect. We do know however, that Beethoven was heavily exposed to Mozart’s music growing up. In one of his early compositions, Beethoven was so strongly inspired by Mozart that he worried that he had plagiarized him by mistake. Scholars have discovered a sketch leaf from about October 1790, where Beethoven wrote down a brief C-minor passage in 6/8 meter, in two-staff piano score, and then wrote down these words, between the staves, about the little phrase: “This entire passage has been stolen from the Mozart Symphony in C.” Sadly, when Beethoven permanently returned to Vienna in 1792, Mozart had already been dead for the better part of one year.