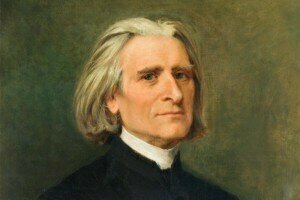 In the world of classical music, Franz Liszt (1811-1886) was the perfect storm! Handsome and fiery, Liszt quickly realized that a musical performance was much more than merely pressing down the correct keys in the correct order. That meant paying attention to the visual aspects of performance and appearing in a kind of musical magic show in which the technical mastery of the instrument would appear to be almost superhuman. In addition, there were the marketing and endorsement aspects of his performances, as Liszt only played pianos made by the Parisian firm Erard, who in turn sold these luxury items to an increasingly affluent public. And finally, Liszt assumed a public persona away from the instrument by managing to run off with numerous beauties, all of them married to influential members of society or Royalty. His social scandals really did not hurt him at all, as it allowed him to earn constant press coverage. Other performers had begun to incorporate some of these aspects into their stage appearances, but for Liszt, everything fell into place. Many people objected, and some still do, but after Liszt, there was simply no way back to the old ways of doing music.

All too frequently, we tend to forget that Liszt was an exceptional composer not only for the piano, but also for the orchestral medium. His second piano concerto had a rather troubled birth, as Liszt, hoping to strike a balance between aspects of virtuosity and musical merit, worked on it for the better part of 24 years! When it first publically sounded on 7 January 1857 in Weimar, a critic called it “The life and adventures of a single melody.” All musical aspects in this single-movement concerto derive from its opening melody, which undergoes a process of spectacular transformation to produce a number of different musical characters. We are not entirely sure that this work is autobiographical, but knowing Liszt, there is a high probability that it was based on his personal life.