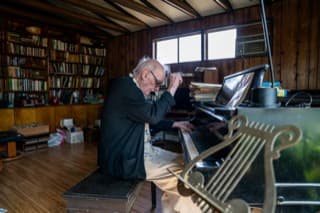 George Crumb, one of the most influential American composers of the 20th century, passed away on February 6th. Crumb’s music was an exploration of humanistic art. A winner of the Grammy Award and Pulitzer Prize, He was known as the avant-garde composer of his time. Often described as spiritual and mystical, his works combine the musical influences of Béla Bartók, Claude Debussy, Charles Ives, and Gustav Mahler, and his inspiration from his hometown, West Virginia.

In an interview, he mentioned that the bouncing and echoing sounds of the rivers in West Virginia are part of the unique language inherited from his hometown. Such echoing effect can be found in Echoes of Time and the River (1965). 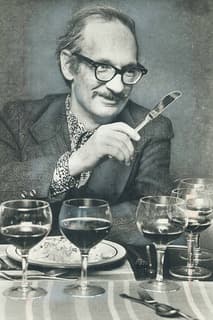 Known as Echoes II, this work was awarded the 1968 Pulitzer Prize for Music. In this orchestral suite, Crumb experimented with echoing and theatrical effects that performers are challenged to play and speak during the performance. At the beginning of the work, some performers are assigned to whisper the motto of West Virginia: “Montani semper liberi!” (Mountaineers are always free). This motto is repeated throughout the work, sometimes assertive and sometimes questionable. Crumb also reused poet Federico Garcia Lorca’s signature motto in this work. The motto”… y los arcos rotos donde sufre eI tiempo (… and the broken arches where time suffers)” is spoken in this second movement which is echoed by a distant and imaginative sound. Crumb first used this quote in Eleven Echoes of Autumn (1965).

His famous work, Black Angels, subtitled “Thirteen Images from the Dark Land,” gives me the most vivid image of the devasting war currently in Ukraine. The composition, written for electric string quartet, referenced the Vietnam War in which Crumb had dated “Friday the Thirteenth, March 1970 (in tempore belli)” on the score. (In tempore belli is a Latin phrase meaning “in time of war.”) In the work, Crumb incorporated various techniques and devices to express the idea of death, including the use of numbers. Black Angels is structured around 13 and 7 as these two numbers symbolize fate and destiny. For example, a tritone in the opening movement is repeated seven times in each part. The use of 13 is more apparent as it is structured with 13 movements, and the word ‘thirteen’ is pronounced in different languages and appears 13 times. Musically, the work is known for its atypical instrumentation (electric string instruments, crystal glasses, and two suspended tam-tam gongs are included). To emphasize the idea of death, the piece quotes part of the second movement of Death and the Maiden by Franz Schubert.

In addition to his unique sound world, Crumb is famously known for his hand-written scores. Image example below is the Spiral Galaxy from Makrokosmos I. Subtitled “12 Fantasy-Pieces After the Zodiac,” Makrokosmos is inspired by Debussy’s 12 Preludes and Bartok’s Mikrokosmos. The Spiral Galaxy is the last work of the first volume, and it is a representation of Aquarius. 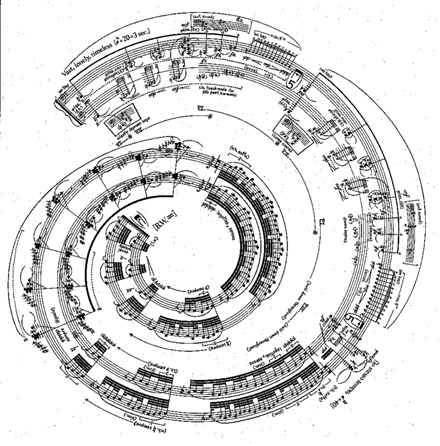 Not only was he influential to the sound world in the 20th century, but he was also an important teacher to many of his composition students, including my former composition teacher, Dr. Christopher Coleman. I remember vividly when Dr. Coleman introduced Crumb’s music in a composition class. I was stunned and amazed when I opened one of his oversized manuscripts to see the beautifully notated score, not to mention how the music affected my appreciation of contemporary works. To honor the contributions of Crumb, Dr. Coleman is organizing a radio program: Remembering George Crumb for RTHK 4 this month. He invited Crumb’s former students and colleagues to submit their memories of their times with Crumb. 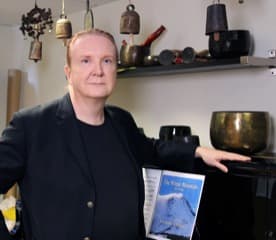 Dr. Coleman was a student of Crumb at the University of Pennsylvania in 1980-1982. A master’s degree student at the time, Dr. Coleman studied composition with George Crumb privately. According to Dr. Coleman, Crumb was always humble and modest. During his study with Crumb, Coleman wrote an extended song cycle, Disappearances. The work, based on the poems written by Coleman’s mother, is written for soprano, clarinets, violin, cello, piano, and percussions. During the private lesson, Coleman brought his work to present to Crumb. Coleman mentioned that Crumb was a fabulous pianist who could read all the parts simultaneously almost perfectly.

Here is one of his memories with Crumb:

“Crumb was known for this absolutely transcendent music–lots of it extremely quiet (ppppp is not uncommon) with unearthly sounds–piano harmonics, strumming the piano strings, bowed cymbals, lots of long, lingering sounds that seem to hang in the air. Very ethereal. When I took the Bartók seminar he smoked a pipe, and the classroom we were in had no ventilation. One time one of the students was presenting, and Crumb was smoking, and the entire top of his head disappeared behind this haze of blue pipe smoke. I thought it would have made a perfect photo for one of his albums.”