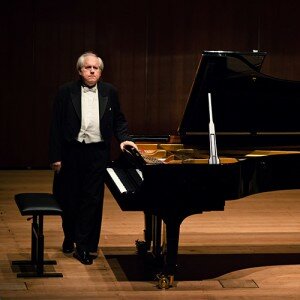 Grigory Sokolov, regarded as one of the best pianists alive, delivered an exceptionally refined and sublime recital at Historische Stadthalle Wuppertal as part of the Klavier-Festival Ruhr 2019, with a programme consisting of Beethoven and Brahms. On a side note, it was heartening to see quite some Asian faces there – especially given that the concert was held in a small town in Germany.

Sokolov commenced the recital with Beethoven’s youthful Piano Sonata in C major, Op.2 No.3. The distinctive “Sokolov” sound was immediately evident, marked by an unimaginably sweet tone. His variety in articulation and level of technical execution was unfailingly impressive. A reflective yet dramatic account was given for the second movement – conveying the purest serenity in the beginning and frustration, fury and struggle in the midst. In the finale full of verve, Sokolov conjured up a kaleidoscope of orchestral colours, complemented with a silky legato and immaculately shaped runs, bringing the music to a triumphant conclusion.

Like his recital in Helsinki last year, Sokolov seemed to prefer no interruptions between pieces. After a very brief bow prompted by ebullient applause from the crowd, he proceeded to Beethoven’s Eleven Bagatelles, Op.119, each representing a unique emotional world coupled with some luscious moments. Each miniature sprang to life under his hands – No.5 (Risoluto) rendered as a spirited march, No.9 (Vivace moderato) characterised as an attractive folk dance.

Sokolov presented Brahms’ Klavierstücke Op.118 and Op.119 as the second half of the programme, which could be regarded as a microcosm of Brahms’ emotional world. Highly expressive, each encapsulates an imagery masterfully created by Brahms, and the bittersweetness and the complex constellation of emotions in the music was, of course, eloquently expressed by Sokolov.

Talking about Op.118, the second Intermezzo in A major – probably the most commonly performed piece by Brahms – was taken at a relatively brisk pace. Sokolov avoided over-indulgence by not “throwing” a lot of sugar into the music and simply let the music speak for itself. This perhaps reflected his conception of love – something everlasting, eternal and not impetuous. Such tender love! A colossal sound was conjured from the Steinway in the subsequent pieces. In the last Intermezzo of the set, the music was impregnated with a haunting fear of death.

In the next opus, Sokolov continued the emotional journey with a delicious presentation of each work. There was a kind of fragile, crystalline beauty in the central waltz section of No.2, a pleasing balance between passion and lyricality in No.3. The final Rhapsodie had the defiance, exuberance and power that it requires, ending the programme on a high note.

With thunderous applause from an enthusiastic audience, Sokolov generously offered six encores and cast a spell on the crowd while he was completely dissolved into the music. Schubert Impromptu Op.142 No.2 was as lyrical and poetic as in my last encounter in Helsinki last year, which contained intense yearning for love and remembrance. After Rameau’s virtuosic Les Sauvages and Le Rappel des Oiseaux, which demanded much dexterity, it came to Brahms’ Intermezzo Op.117 No.2 and Rachmaninoff’s Prelude Op.32 No.12. The Rachmaninoff piece was particularly absorbing with such expressivity – which its sense of longing and nostalgia was directly transmitted to the listeners. The last precious offering was Debussy’s Prelude Book 1 No.6, Des pas sur la neige, which brought the evening to a peaceful end.

Contrasting to his stage demeanour, Sokolov always shows a welcoming and more-than- courteous smile at backstage where admirers line up to pay their respects. Instead of performing merely for himself or for the audience, Sokolov plays for the sake of making music and sharing his love for every composition he performs. His playing is completely devoid of histrionics or anything superficial. There is only pure music in his playing and it is the sincerity that makes his playing so touching. The love and humanity in his music heals souls in the times of darkness and turmoil — as Amor vincit omnia.