Frédéric Chopin had turned twenty-five when he fell passionately and hopelessly in love with sixteen-year old Maria Wodzińska. He had known her as a child, and “used to chase her through the rooms at Pszenny.” She in turn greatly “annoyed the grown-ups by pulling faces at them.” Maria’s older sister remembered that “of all the boys he was the most willing to joke and play.” When he saw her again in Dresden in 1835, she had blossomed into a dark-eyed Polish beauty. She was a talented painter whose portrait of the composer is widely considered among Chopin’s best likenesses. And, of course, she was a capable pianist, enamored by the composer’s G-minor Ballade. Chopin stayed in the Wodzińska household for two weeks, and in exchange for this hospitality he agreed to give piano lessons to Maria every afternoon.

While on holiday in 1836, Chopin returned to Dresden and proposed to Maria. It was much more than her beauty and talent that attracted him. He was lonely and homesick, and Maria embodied everything he had left behind. Maria was predictably thrilled, her parents less so. Although they initially accepted him into the family, they were sufficiently worried about his whirlwind social life, his frequent ill health, and his status as a composer. As such, they imposed a one-year waiting period to see if his health, fortunes, and habits would improve. Chopin was forced to accept the parental conditions and returned to Paris, were his life only got messier once he met up with George Sand. Chopin’s compatriots meanwhile report, “The thought of Maria, the distant beloved, radiated with all her fires every time a letter came to assure him that she counted the months that separated them from their reunion.” 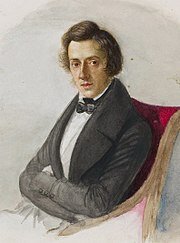 Chopin kept telling Maria’s mother, Teresa Wodzińska, that his health was improving and that he was living a clean life to “preserve his fragile health.” The truth was somewhat more complicated. A typical day saw Chopin engaged in five or six hours of teaching followed by musical and social engagements in the salons of nobility that would extend into the early hours of the morning. His busy partying schedule was a secret to nobody, least of all Teresa Wodzińska. Even Robert Schumann got into the act and dismissingly wrote, “It is sad that in his seven years in Paris he has done almost nothing.” In the event, Chopin received a “Dear Fryderyk” letter from Maria in the spring of 1837. It was a short letter that offered no explanations, and Chopin was taken by complete surprise. He bundled up Maria’s correspondence and labeled them “My Sorrows.” He also dedicated the “Farewell Waltz in A-flat major” to “Mademoiselle Maria.”

Chopin did not take the rejection well, and years later he would write, “What shallow, unscrupulous and heartless people.” He also suffered through the flu epidemic in the winter of 1837, an infection from which he never fully recovered. Chopin channeled his deep depression and frustration into the composition of a Marche funèbre (Funeral March). Gradually this outpouring of sorrow became part of a larger structure, and the Sonata No. 2 in B-flat minor was completed in 1839 and published the following year. Things did not end well for Maria. She eventually married the son of Count Frederic Skarbek in 1841. Joseph Skarbek was certainly rich, but physically unattractive and certainly not the brightest intellectual star in the firmament. The unfortunate marriage was divorced in Rome, and Maria later married M. Orpiszewski, who, together with their only son, tragically died from tuberculosis.