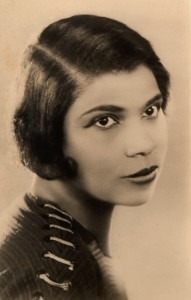 With regal bearing and a voice of rich intrinsic beauty, contralto Marian Anderson was one of the most celebrated singers of the twentieth century but she had to struggle to overcome racial prejudice that was rampant during the time she was establishing her career. “I had become, whether I like it or not, a symbol, representing my people.” Singing for an audience of 75 thousand in front of the Lincoln Memorial in 1939 and millions more via radio, as she had been denied an appearance in Washington’s Constitution Hall, she said, “Music chose me,” and with that she broke down some of the barriers that had plagued African American performers. 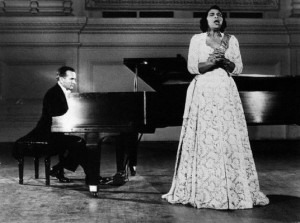 Anderson was born in 1887 in Philadelphia. Her father sold ice and coal. When Anderson’s father died suddenly, Marian’s mother, although trained as a schoolteacher, became a housecleaner to support her family of three daughters. The United Baptist Church of Philadelphia was their refuge. Marian’s aunt who was very active in the church choir recognized Marian’s extraordinary gift, and urged her to join the junior choir of the church which offered the six-year-old opportunities to sing. Her aunt arranged for appearances at local events and took her to concerts. Within a few years, Marian’s earnings rose from 25 cents to five dollars per appearance. Still the family had no money for music lessons. The community believing in her outstanding abilities raised the funds for Marian to study.

After attending high school, Anderson naively applied to the Philadelphia Music Academy, (University of the Arts) which was at the time an all-white music school. “We don’t take colored,” said the woman admissions officer. Anderson persevered.

She continued to perform and study privately, winning competitions and even appearing in Carnegie Hall in 1928, but the struggle with racial prejudice was such that it led her to try her luck in Europe. It was a gamble that paid off. Paris had an impartiality that Marian hadn’t encountered before and Scandinavians were very open-minded too. Maestro Arturo Toscanini when he heard her sing remarked, “a voice heard once in a hundred years.” This endorsement opened many doors for the young artist. 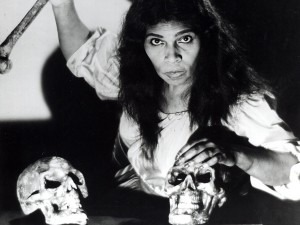 Marian Anderson broke the color barrier at the Metropolitan Opera in 1955 when she starred in Verdi’s Un Ballo in Maschera.
Credit: Sony Classical Archives

By the 1930’s she was touring extensively welcomed in the grandest salons, restaurants, cafés and concert halls of Europe. In fact, she so mesmerized the audience in Leningrad that the audience stormed the stage, and pounded the stage floor with their fists to express their zeal. Composer Jean Sibelius feeling that Anderson had ‘penetrated the Nordic soul’ rewrote and composed songs for Anderson to perform. Fans were overcome with “Marian fever.”

Sibelius: 5 Songs, Op. 37: No. 5. Flickan kom ifran sin alsklings mote (version for voice and piano)
Anderson’s dignity and sincerity as an artist brought tears to the eyes of her devotees. After a recital in Paris the great American manager Sol Hurok witnessed the effect. He invited Anderson to the U.S. for seven concerts beginning with New York’s Town Hall. Anderson’s rave reviews had preceded her. Everyone flocked to the concert curious to hear what the fuss was about.

Out she came onto the stage with a stunning, elegant presence. Then she opened her mouth.

Her extraordinary voice impressed the critics who called her “one of the great singers of our time.” But many “didn’t want to hear that kind of singing from a Negro,” said Todd Duncan, (George Gershwin’s preferred baritone for Porgy in the first performance of Gershwin’s opera Porgy and Bess, a role he did 1800 times.) African Americans should stick to vaudeville and spirituals not art song, or lieder in foreign tongues! 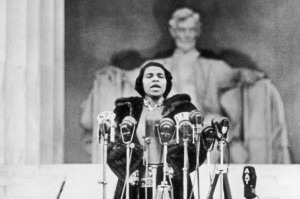 By this time the political situation in Europe had degenerated. Marian Anderson was not welcome anymore as the Third Reich regime came into power. She was non-Aryan. Anderson continued to pursue her career in the United States performing many concerts and recitals.

But Anderson’s contracts posed issues. Some concert halls didn’t allow black performers. And of those that did, many had segregated seating. Some allowed African American audience members to sit only in the back row; a barrier vertically divided other halls and some halls wouldn’t allow African Americans inside at all. Anderson refused to perform in segregated theaters.

Laws regarding housing and transportation for people of color plagued her wherever she appeared. Every hotel and bus was a problem. Where could she stay? Where could she eat? (Sometimes she’d munch on a sandwich outside.) How could she do laundry? Where could she practice? —All privileges we take for granted today. Due to this appalling discrimination none other than Albert Einstein, who was a great champion of tolerance, hosted Anderson many times. And she? Marian always maintained her dignity making many recordings of diverse repertoire often including American songs and spirituals.

Traditional
Dett, Robert Nathaniel – arranger
Poor Me
People clamored to hear her. Todd Duncan, almost in jest, suggested a large place— Constitution Hall in Washington. After Hurok’s request for a date was turned down repeatedly, news got out. The public was scandalized. The Daughters of the American Revolution who owned the hall had a “white artists only” clause in their contracts. First Lady Eleanor Roosevelt came to the rescue. The 1939 Easter Sunday performance would take place at the Lincoln Memorial in front of countless thousands of people. A self-possessed Anderson appeared launching into My Country, ‘Tis of Thee. There was not a dry eye in sight. 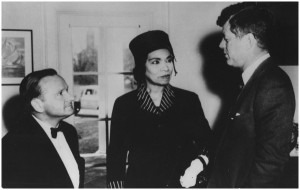 Finally, in 1952 she performed at Constitution Hall and in 1955 she broke the last barrier— the first black performer, American or otherwise to appear at the Metropolitan Opera.

Verdi: Un Ballo in maschera
Act I: Zitti … l’incanto non dessi turbare – Re dell’abisso, affrettati (Ulrica)
She became the idol and mentor of other greats who followed including Shirley Verett, Leontyne Price and Jesseye Norman, who said, “’This can’t be just a voice, so rich and beautiful.” ‘It was a revelation. And I wept.’”

Anderson was the recipient of numerous awards including the Presidential Medal of Freedom, the Kennedy Center Honors, National Medal of Arts and a Grammy Lifetime Achievement Award. President Eisenhower selected her as a delegate to the United Nations. But her proudest moment was when she called the department store where her mother furiously scrubbed floors to say, “ My mother won’t be in for work today, or anymore.”

Marian Anderson is truly an inspiring icon whose music transcended all boundaries. For more read her autobiography My Lord What A Morning, and view the documentary below full of mesmerizing interviews and amazing performances— time well spent.