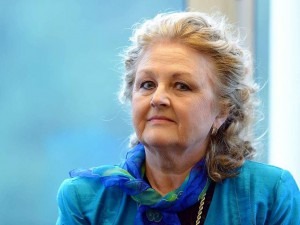 Gaetano Donizetti‘s rarely performed masterpiece Roberto Devereux screams out for a truly great soprano as the Tudor Queen Elisabeth I. Certainly the most successful Donizetti opera commissioned by the great impresario Domenico Barbaja (in 1837), the work was largely forgotten until prima donnas like Beverly Sills and Montserrat Caballé revived it in the 1970s. Today, a great Elisabetta still merits a trip, even a long one.

Last year I flew from Hong Kong to Florence to witness the venerated Mariella Devia in a role she has sung countless times, and went on to perform to great acclaim at New York’s Carnegie Hall a few months later. I reckoned it was the last time I would see the 67 year old Italian diva. An end of career sort of appearance. Her performance was exceptional: majestic, elegantly sung, sensitive, but safe and cautious. Top notes were avoided, the production was in concert format, and the star was supported by a respectful cast. 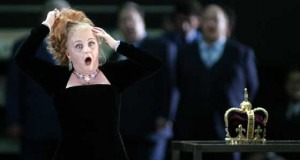 This year I flew to Munich to see the 68 year old Edita Gruberová in the same role (July 15, 2015). I reckoned it would be her last time in this extremely challenging role. The Slovak diva delivered nothing like an end of career performance. Nothing safe, nothing cautious. She thrust herself at the role, physically and vocally, attacked every high note with relish, took her time through the trickiest coloraturas, and lapped up the pianissimi with ease. She threw herself on the ground, tore off her wig, and credibly portrayed the monarch going insane over the betrayal of her lover and best friend (a totally fictitious turn of the story).

Gruberová, who started her career in the 1970s, sang under Herbert von Karajan and Carlos Kleiber, and has clocked nearly 50 years since her breakthrough at the Vienna State Opera, is showing virtually no signs of aging. Always the dominant force on stage, rather than tiring during the course of the evening, the diva seemed to gain strength throughout the three acts, climaxing in the harrowing double finale of Vivi ingrate and Quel sangue versato, confidently finishing off with a sustained high D. Any occasional vocal slippage was swiftly caught and effortlessly adjusted. 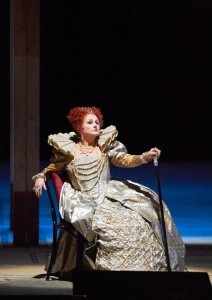 Gruberová was well matched by mezzo-soprano Sonia Ganassi, who played the Queen’s best friend-turned rival Sara, Duchess of Nottingham. Her husband, the hard-done Duke who is deceived by both his wife and his best friend Devereux was portrayed by Franco Vasallo, who boasts one of the smoothest and best controlled baritones on the stage today. The young Siberian tenor Alexey Dolgov as Roberto Devereux was a courageous choice. A fine tenor in the bel canto tradition, he didn’t have the vocal heft of his colleagues, though his acting was convincing and he delivered some stunning legato in the final act, in spite of the direction which had him singing both blindfolded and with his pants pulled down.

The evening clearly belonged to Gruberová. The normally well behaved Bavarian State Opera audience was out of control, and refused to leave the premises even after the diva had taken dozens of curtain calls. They then patiently waited for Gruberová to sign programs and CDs. An autograph worth waiting for. A voice worth travelling for.